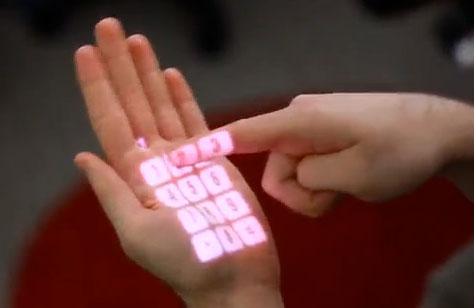 Things are about to get interesting as Microsoft and Carnegie Mellon Human Computer Interaction Institute have created a new interface that can be displayed on any kind of surface and transform that surface into a multi-touchscreen.

With the help of a system worn on the shoulder, it will locate the surface you’re working on in 3D, thus making all your surfaces touchable with the ability to recognize whatever movements you want it to.

OmniTouch, as it’s been dubbed by the producers, supports “clicking” with a finger on any type of surface, zooming in and out, defining surfaces, opening up qwerty keyboards, dragging into any direction, making circles and much more.

Unlike Microsoft Surface, the OmniTouch doesn’t need any bulky hardware, although it is bigger than many would wish. Since the device is in a concept stage, it could become smaller in the future and thus accommodating the general desire for smaller more portable intuitive touch devices.

So far, the system works good on arms, hands, notebooks and tables and we’re sure more unconventional surfaces will soon be under control for these smart screens.