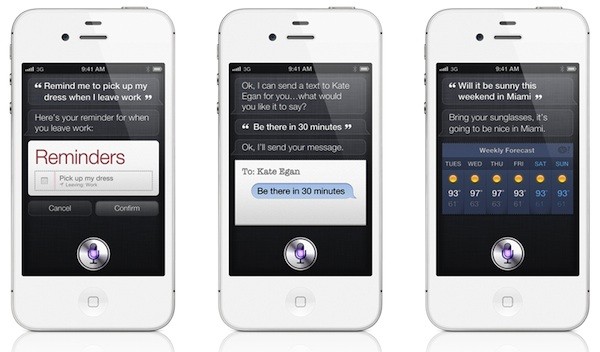 It has been 18 years since Apple ventured into the handheld electronics world. They kicked it off with devices like the Newton Message Pad and now we have the advanced iPhone 4 with iOS 5. You can do almost anything on your smartphone these days and the advent of smartphones like Android devices and iPhone iterations, and most recently tablets have spelled the demise of the PDA.

Initially developed outside Apple, Siri became an outstanding feature for iOS 5 on the iPhone 4S. Siri can be described as the personal digital assistant to the iPhone 4S. The original Siri app worked fine with the iPhone 4 but the lack of apps supporting are Apple’s way to differentiate iPhone 4 from iPhone 4S aside from a hardware bump.

The app is more than just an entertainment feature or  simple voice control support. Siri considers the voice as a necessary factor in achieveing a rich multi-input digital experience for users. With its amazing speech recognition accuracy, Siri has become widely popular. iPhone 4 users also want to gain access to Siri, but at present, this only remains conceptual.

Efforts done by developer Steven Troughton-Smith and the people at 9to5 Mac can pave the way to have Siri on iPhone 4.   It may not be a simple install however, iPhone 4 owners trying to get Siri will need to bypass the company’s app install authorization.

The iPhone 4 does not possess the dual core CPU of its successor but the port of the voice assistant was done with the use of the 4S Siri and Springboard files. The result, although not perfect, a Siri port that can recognize spoken commands. There’s still a missing driver so we don’t have the means to gauge the speed of Siri on iPhone 4. The question now depends on if Apple is blocking Siri on iPhone 4 at the server level by checking the hardware model.  Troughton-Smith has already improved the performance of the app on iPhone 4 though and Apple’s servers remain inaccessible.  At this point if Siri can run on iPhone 4 hardware then really the only reason Apple could be witholding it from owners of this hardware is to force a feature upgrade.  You want Siri, get an iPhone 4s.