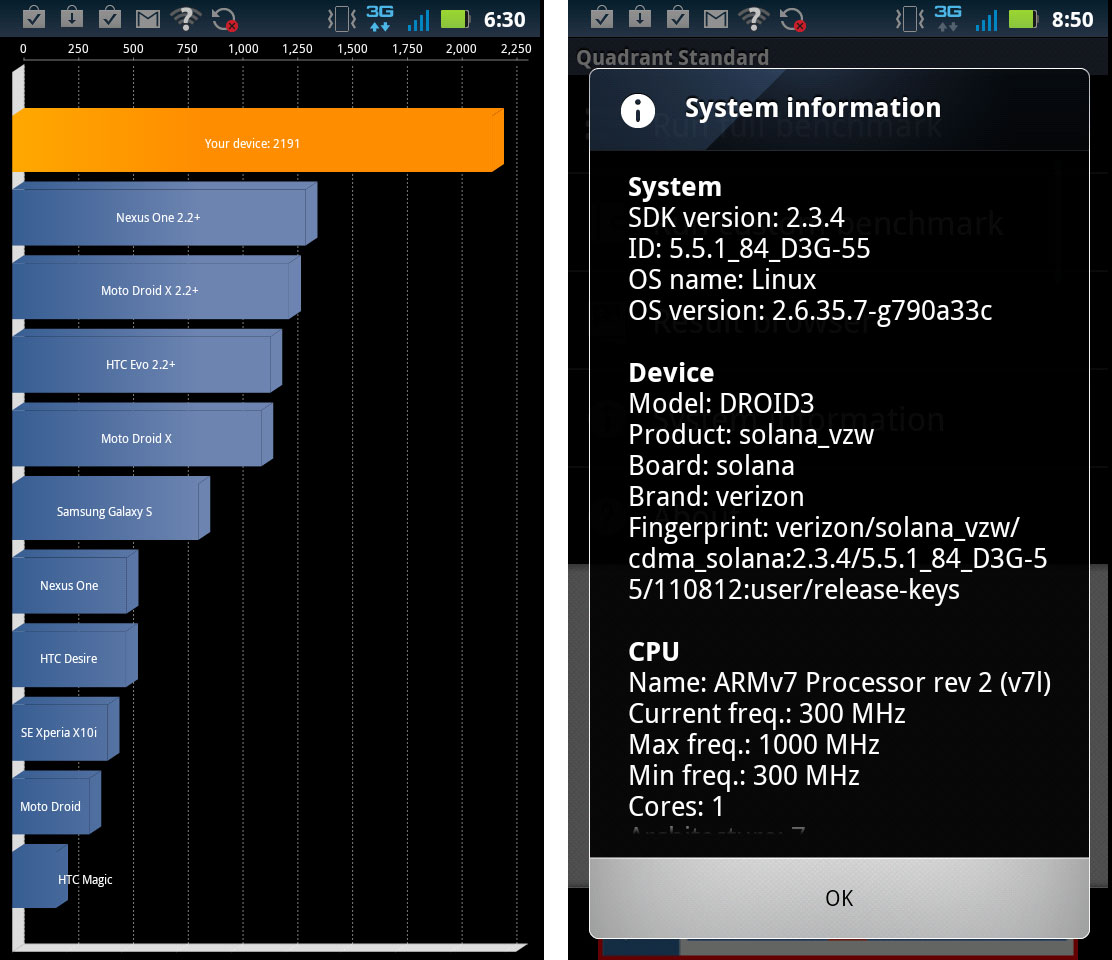 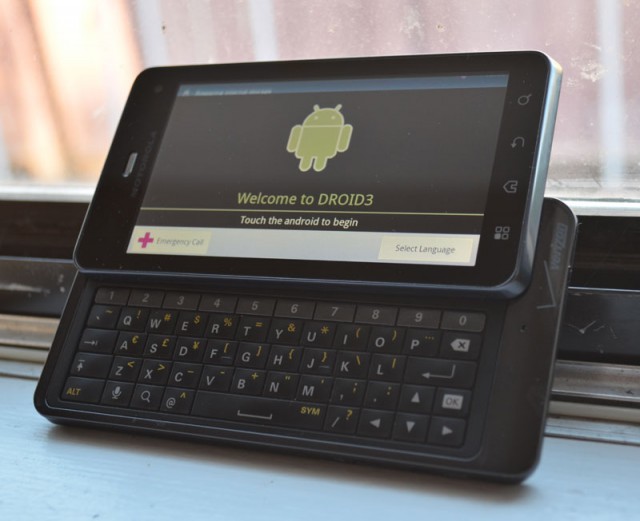 The Motorola Droid 3 is one of the fastest Android handsets on the market. The 1 Ghz dual core processor allows it to handle the most taxing apps and games you can get your hands on. The design is in line with the previous Droid models, this one being the slimmest of them all. The handset measures 4.9 inches by 2.5 inches and just 0.5 inches thick. This is quite larger than the iPhone 4 and gives you that 4-inch qHD (960×540) display that is big, beautiful and vibrant for watching videos, typing emails and surfing the web. The full retail price is $460, or $199 on a 2 year plan with Verizon Wireless. 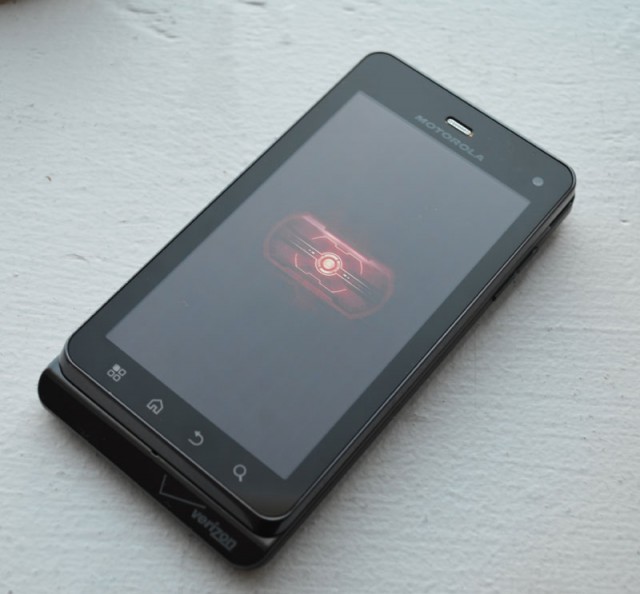 Design
This has to be one of my favorite Motorola handsets to date. The keyboard’s tactile feedback is superior to most others ive used. It’s a horizontal slider, just push down and the keyboard slides out on the bottom. The spacing of the keys are offset in a way that you would be more used to, rather than being setup like those QWERTYs which for some odd reason have all the keys overtop of eachother unlike a traditional keyboard. On the Droid 3 you get a dedicated row of number keys, this was pleasing since one thing I can’t stand about touch screen devices is that the majority of them hide the numbers in a 2nd menu, and then ones with QWERTY keyboards orient them in such a way that you would need to use the ALT or FN key in an obscure location of letters. Not the Droid 3.

On the bottom you have a Micro-USB port and HDMI port, the volume rocker is situated on the opposite side, while the power button sits on top. I would have prefered the Micro-USB to be on top, so that it wouldn’t get in the way when it’s charging. You have dual cameras of adequate ability, although the VGA camera on the front is poor in low light, which front facing camera isnt. The rear 8 megapixel performs slightly better, but nothing to replace your P&S with. There’s also no dedicated camera key, which could have been added since there’s a heck of a lot of room on this thing to put more buttons. 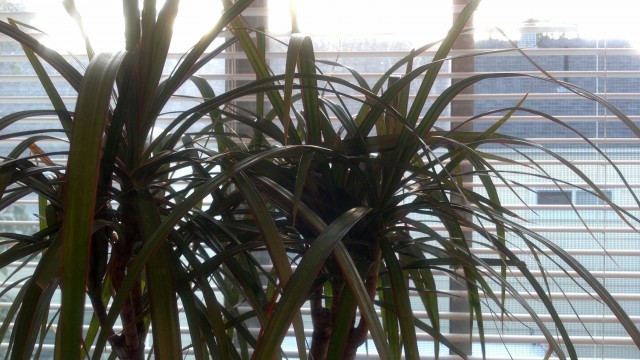 Software
The Motorola Droid 3 is running on Android 2.3 Gingerbread with Motorola’s Motoblur software over top. It’s a nice experience, smooth, easy to navigate and gets the job done. You have a dock which you can customize with four of your most used apps. I wouldn’t say its the best, but it’s definitely far from the worst. I think this is more of a personal experience so you should test all phones with that in mind, feel out the UI and decide what works for you best. What feels most natural. One thing to mention is that although with a hardware keyboard, Motorola didn’t cheap out on the software keyboard. It’s very nice and responsive, easy to quickly tap out something without sliding out the full QWERTY.

Verizon is all over this thing. V Cast Music, VZ Navigator (not my choice), V Cast Tones, Vast Videos and some others I didnt get around to using. Skype Mobile and Quickoffice, as well as the Kindle app are stock which is nice to have from the get-go. Unfortunately there’s no way to delete them either (unless you root it). Which is a synch, you can root the Droid 3 with a simple utility that does it for you with a single click.

With advanced security features, it may be an appealing device to business users and professionals. Some of these include advanced SD Card encryption, remote data wipe, and complex password support. Verizon also ships it with GoToMeeting, if you don’t use it already, this will let you join online meetings. Another bonus is the Citrix Receiver, its an app that allows you to access your desktop remotely.

World roaming allows you to take this with you anywhere. On Verizon however, it will function on the companies CDMA/EV-DO Rev. A network. Globally, it can jump on a GSM network of another carrier. To do this you will need to have the phone unlocked, which Verizon would do for you if you’ve been a customer for longer than 60 days. This will enable you to purchase a SIM card from an international carrier and utilize local carrier fees in that country rather than pay exorbitant roaming fees.

The phone has speakerphone, which is next to terrible in most situations. The majority of calls I tried to use speakerphone with I had to switch to regular mode as the callers could barely hear me. The complaint was typically “you’re voice is breaking up.” So driving in a car which you would expect a speakerphone to work with, doesn’t perform as well as expected.

With a decent camera app, a strong 8-megapixel camera sensor with autofocus, LED flash and 1080p HD Video capabilities, you could theoretically get by with just this as your shooter. I myself wouldn’t, but some people could. Remember, it’s all about sensor size and quality. The video was good, a bit of grain, but in a nice way. Colours were over satured in still shots, in low light, well, what smartphone camera actually does perform well in low light really? You use the flash and you get those sparsely lit ugly pictures.

As I mentioned earlier, the speakerphone resulted in poor audio quality for the receiving party. I sounded broken or far away to callers, on the other hand they sounded perfectly clear and sharp to me. This could have been background noise, weak signal, or perhaps a problem with the microphone hardware itself.  I don’t know if others have experienced a similar problem, but if you have let us know. 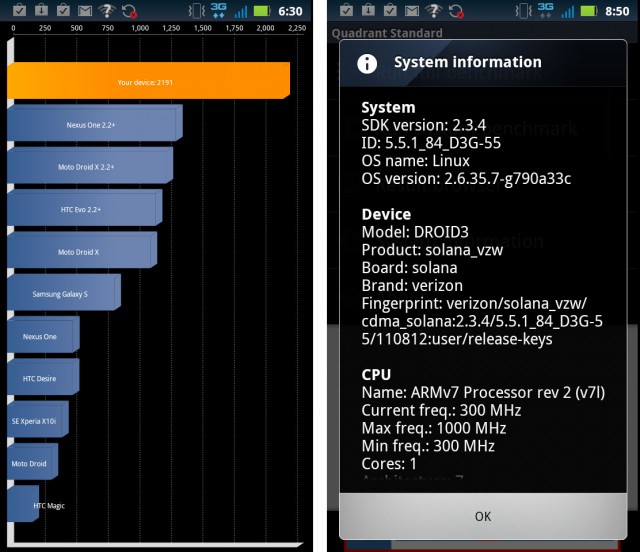 As you can see in the Quadrant benchmark, it ranked 2191.  By the looks of it, nearly 100% faster than the Nexus One and HTC EVO.

Running the Texas Instrument’s OMAP 4430 1GHz dual-core processor with 512MB of RAM, this is one of the fastes smartphones on the market as I’m writing this. Apps load quick, it boots very fast, the cybernetic Droid eye is also a nice touch.

Battery life is ok, but not good. From a full charge I streamed live video over 3G for a 45 minute commute and ended up with 10% battery remaining. Talk time is rated at 9 hours and standby is 12 days. I didn’t get nearly close to those numbers. The FCC radiation tests list the Droid 3 with a SAR rating of 0.77W/kg and a Hearing Aid Compatibility rating of M4/T3.

I liked the Motorola Droid 3 as an overall smartphone, enough so to make it my daily handset. The full QWERTY keyboard is really a treat, making texting, emailing and surfing a fluid and natural experience. I never felt like I was restricted at any time while using it; I could type as fast as I wanted. Battery life and screen resolution could be improved, and lacking 4G doesn’t really help things either. GPS connections are intermittent, the built-in apps make this an out of the box GPS but the hardware is just not performing as well as it could.