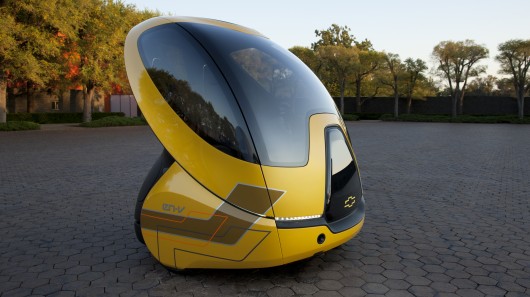 The Electric Networked Vehicle (EN-V) concept was revealed by GM last year in three “flavors” which were conceived by design teams all over the world. The company has started working on the next-generation EN-V concept vehicle as a part of their effort to make the two-seat, electric urban mobility concept materialize in the real world. GM is gearing up for pilot test demonstration programs in chosen megacities around the world. The EN-V vehicle will become part of the Chevrolet brand.

The next-gen EN-V concept will bear the Chevrolet badge and will possess a personal storage space, a climate control and all-weather and road operation features, but it will retain the pod-form of its predecessors. Lithium-ion batteries will power the most recent model and these can be recharged from a standard household outlet. The vehicle can run up to 25 miles on a single charge!

Together with the Sino-Singapore Tianjin Eco-City Investment and Development Co. Ltd. (SSTEC), GM has signed a memorandum of understanding in order to integrate the EN-V into the Tianjin Eco-City for testing. Tianjin Eco-City is an eco-friendly city that will serve as the home of around 350,000 residents. It is being constructed at around 150km of Beijing and it is collaboration between the Singaporean and Chinese governments to create a place that will promote and practice environmentally-friendly habits.

The EN-V’s ability to communicate with other vehicles will help to minimize crashes and traffic congestion. Also searching for a vacant parking space will be easier, as well as finding the fastest route by using real-time traffic information.