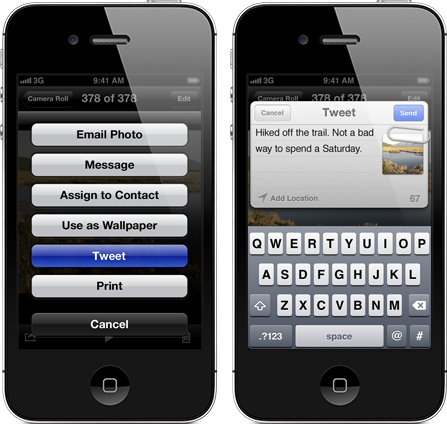 Twitter users will love to hear that the social networking platform has become fully integrated into the new iOS 5 mobile operating system by Apple. Today, available for the first time you can read and share tweets using your iPad, iPod Touch or iPhone seamlessly from within the OS. Unfortunately some users are having issues with iOS 5 upgrades which end up bricking their phone, but that may be a rare instance.

How do you use it? Well, its very simple. Just enter your login information on Twitter using your device and voila! You will always be connected to the site. In addition to this, the integrated Twitter for iOS 5 will allow you to tweet directly from the Apple apps such as Maps, Camera, Safari, Photos, Youtube and many more. Third party apps can also be used to make direct tweets like the Flipboard, Instagram, popSugar, LivingSocial, Chomp, Showyou, SoundTracking and many more.

Take advantage of the most recent Twitter version for iPad, iPhone and iPod Touch which lets you upload images directly to Twitter. You can get the Twitter app now by downloading it from the App Store.