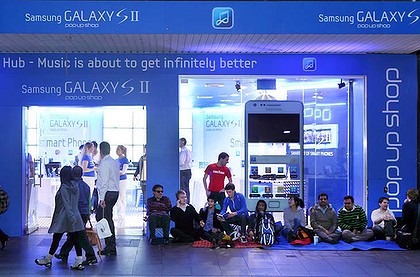 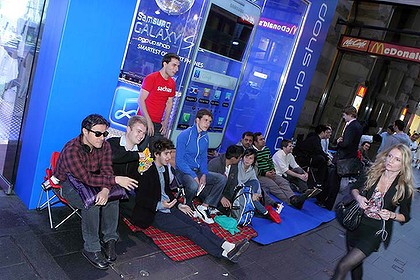 Well, that’s one way to get some attention. The launch of the iPhone 4S at the Apple Store in Sydney is going to be the first place in the world where people will be able to buy the new smartphone, but Samsung is looking to steal some of that thunder. You see, they ambushed the event by setting up a temporary “pop up” store just a few shops over. And they’re selling smartphones for two bucks.

To counter the droves of people lining up outside the Apple Store, Samsung is encouraging an equal number of people to camp outside this temporary store. That’s because the first ten people each day at the temporary Samsung store can buy the Galaxy S II for just two bucks. This is a $600+ smartphone for two dollars. Two!

And depending on who you ask, the Samsung Galaxy S II is a superior phone to the iPhone 4S. Yes, there are still going to be people who would rather still line up and pay full price for Siri and the new iPhone, but this is a clever marketing ploy by Samsung. And it looks to be working better than the double-sized Microsoft Stores being set up next to Apple Stores. If it was just a pop-up store, no one would care, but the $2 high-end superphone is a clear draw for sure.

Check out the video on SMH.com.au. 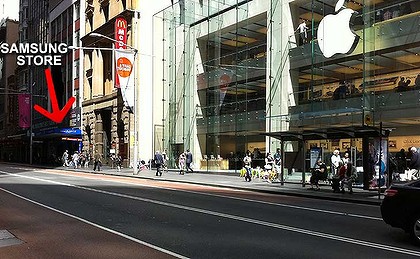