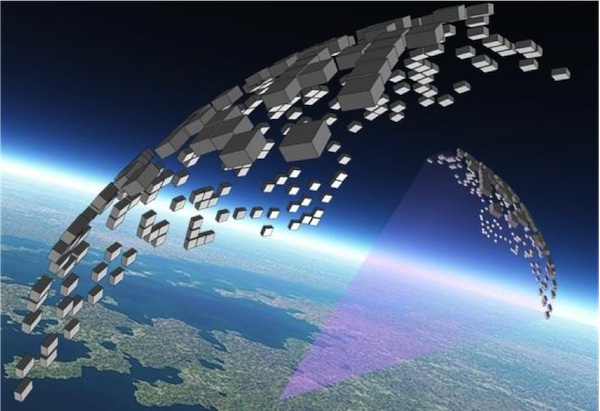 A new project called KickSat aims to launch tiny satellites into space for the price of $300 per satellite.  The tiny boxes contain small, self-contained, solar-powered radio transmitters which can later be tracked using the Genso project for amateur radio operators.

Sprites are the size of postage stamps and are formed of solar cells, a radio transceiver, and a microcontroller with memory and sensors, exactly like bigger satellites, just at a smaller scale. The first version is able to transmit its name and a few bits of data, but future versions could include other types of sensors, from thermometers to cameras.

The KickSat will launch in low-altitude orbit and organizers have guaranteed that all the Sprites will re-enter the Earth’s atmosphere within a few days or weeks and it will leave no trace of space debris, much to the relief of those concerned about the amounts of debris piling up around the Earth. The launching capsule will probably last longer than the Sprites, organizers say, as it take a few months until it burns into the atmosphere.

The project is on Kickstarter and requires $30,000 to get off the ground.