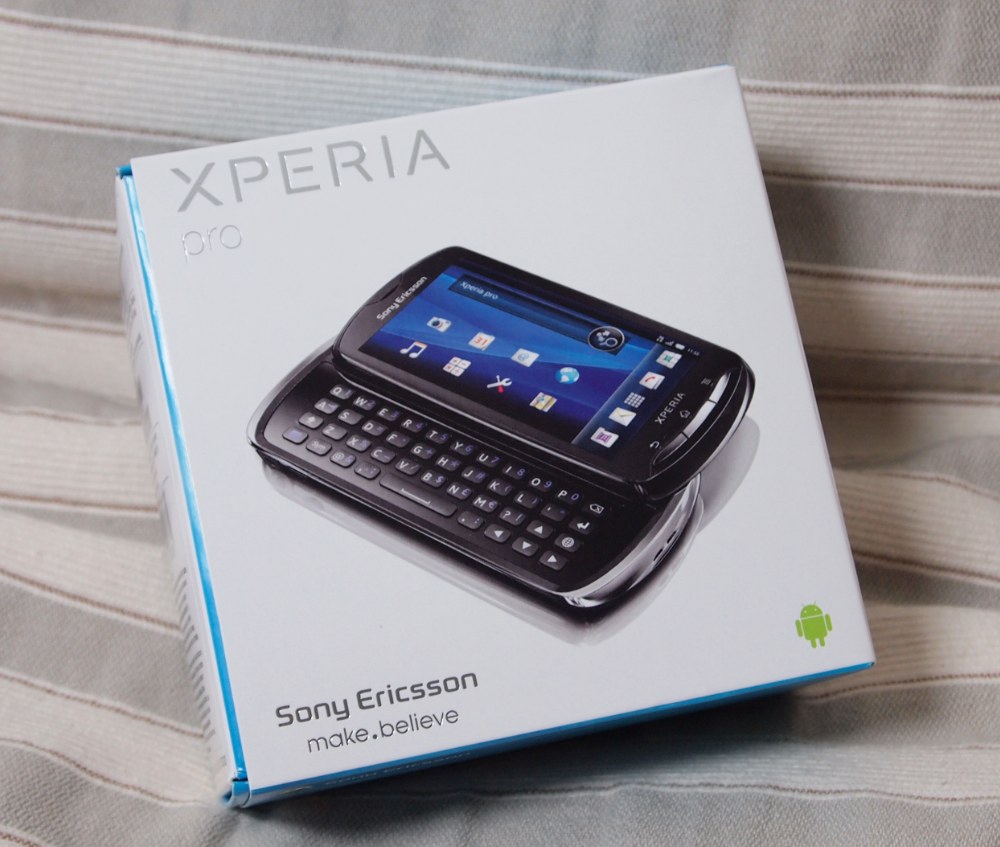 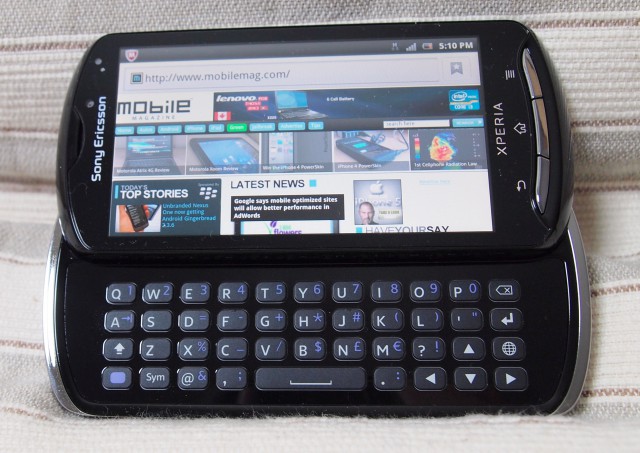 Although touchscreen displays have become hugely popular in recent years, there are still tons of people out there who prefer to have physical keyboards. Sony Ericsson recognizes this and that’s why in addition to the Xperia Neo, they also have the Xperia Pro. This Android smartphone recently launched here in Canada and we’ve taken it out for a test drive.

Naturally, the Xperia Pro is geared toward a slightly different kind of customer than the Xperia Play. Instead of slide-out gaming controls, it gets a slide-out QWERTY keyboard. That’s easily one of the biggest differentiating factors that makes this smartphone unlike other Xperia devices and increasingly unlike other Android smartphones in general. 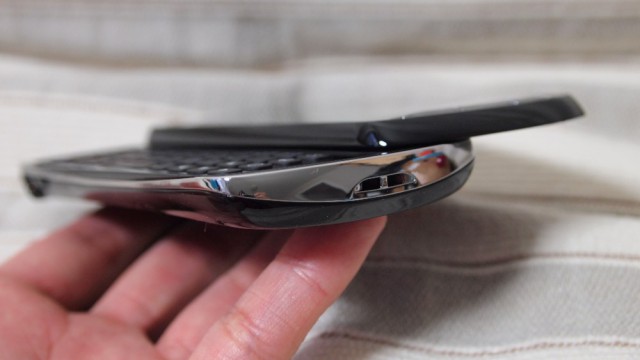 Not unlike the Google Nexus S, the Sony Ericsson Xperia Pro has a glossy and smooth plastic exterior. Some people may think that such a finish feels cheap, but that’s largely a matter of personal preference.

The sliding mechanism for the keyboard feels robust and the three buttons along the bottom are typical of the Xperia line. I’m personally not a fan of these “slim” buttons, but they’re a relatively minor quibble. Performance appears to be improved over earlier Xperia smartphones and the overall size, while not all that compact, is a touch smaller than some of the larger Android “superphones” that have flooded the market.

For my money, the Super AMOLED Plus display on the Galaxy S II is still the best in the business in terms of contrast and saturation. The Xperia Pro doesn’t do AMOLED, but its LED-backlit LCD gets some help with what Sony Ericsson calls the Sony Mobile BRAVIA Engine.

This helps to bump up the graphics a fair amount. While it’s still not as impressive as AMOLED, this LCD easily beats what we see on most HTC devices and what we see on the Motorola Atrix. The colors don’t feel nearly as muted and this is a definite step forward when it comes to gaming, videos, and so on. 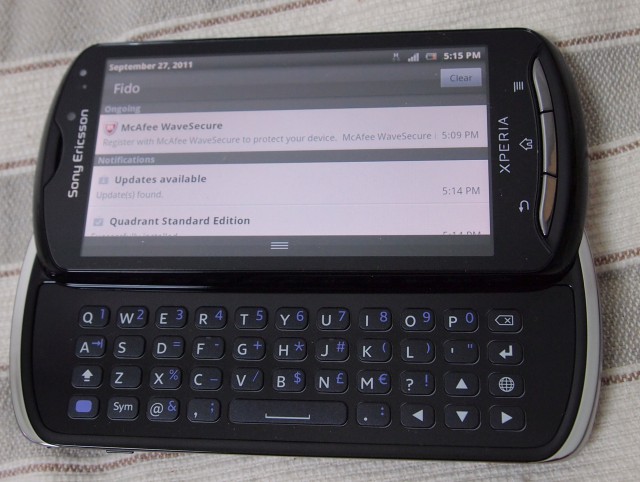 Typing on the Keyboard

With the exception of only a handful of handsets, the majority of Android smartphones these days do not have physical keyboards. This will easily be a draw for fans of tactile feedback. The good news is that the QWERTY keyboard on the Xperia pro is quite good.

I still wouldn’t really want to use it to type out an extensive academic paper or anything like that, but it’s fantastic for e-mail messages, text messages, and even short blog posts. The keys offer a soft surface and they are slightly domed. Coupled with the decent spacing, it’s really easy to type based on feel. It should be noted that the keys are not arranged in a slightly staggered fashion, like how you’d find on a computer keyboard; they’re in a perfect grid. So, this may take some getting used to for some folks, but I thought it was pretty great.

Timescape and Other UI Tweaks

My first experience with the Timescape UI from Sony Ericsson was with the Xperia X10 last year. At the time, it was a sluggish experience that seemed to completely bog down the overall performance of the phone.

This time around, the UI still has much the same look, but performance doesn’t feel nearly as much like you’re trudging through a sea of molasses. I’m still not the type to use the aggregating social media service, but I can recognize its value. The rest of the UI isn’t the same as stock Android either — the app tray is arranged in pages rather than being an infinite scrolling list — but that’s not necessarily a bad thing. No real complaints, but no huge praises either.

To get a sense of the performance of this phone, I ran it through the Quadrant Standard Edition benchmark. The first run through only rendered a score of 1400, but subsequent trials earned scores of 1654 and 1685. That’s a definite step above the Nexus One (1300), but easily below dual-core alternatives like the Atrix (2281).

As far as the network speeds on the Fido network, I used the Speedtest Mobile app. The ping was anywhere from 107ms to 128ms. Download speeds ranged from 5881kbps to 6891kbps, putting it close to the theoretical 7.2Mbps cap on HSDPA. The upload speeds were decent too, ranging from 1089kbps to 1193kbps.

Sony Ericsson is a big company, to be sure, but it’s still not among the top-tier when it comes to Android smartphones. That upper level is probably still held by HTC and Samsung, possibly with an honorable mention to Motorola.

The Xperia pro continues with that kind of tradition. It’s not going to win any awards and it’s not going to floor you with its performance. What it is going to provide you is a more than adequate Android experience at a reasonable price. The 1GHz processor feels dated compared to its current dual core (and soon to be quad core) competition, but it gets the job done. The keyboard is a plus, for people who like keyboards, and the camera (here are a couple of sample photos) is very good too.

Considering that you can get the Xperia pro for $30 on contract or $350 outright, you’re getting a pretty decent deal. This phone is forgettable, but it’s not bad either.