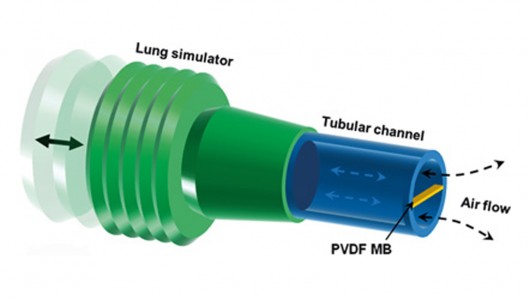 Have you ever wondered if your breath can produce electricity? Maybe not, but the answer is still yes. It can… if the correct device is used.

Researchers at the University of Wisconsin-Madison have invented a device that uses the air entering the body to produce little electrical impulses which can power biological implants. Even a low speed airflow caused by normal human respiration can produce vibrations in a plastic microbelt engineered from a piezoelectric material.

“Basically, we are harvesting mechanical energy from biological systems. The airflow of normal human respiration is typically below about two meters per second,” said one of the creators of the device. According to him, they calculated that small vibrations can produce a microwatt of electrical energy that could be useful to sensors and other devices implanted in the face.

They invented a thin material in which the electrical charges can be preserved. The PVDF material is biocompatible and in the tests ran so far, it reached up to 6 volts with maximum airflow speed. Assistant Professor Xudong Wang, postdoctoral researcher Chengliang Sun and graduate student Jian Shi now plan to look for ways to improve the efficiency of the device.