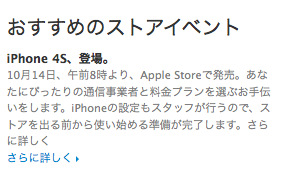 You may be doubting the legitimacy of an iPhone 4S, well, there’s an overwhelming amount of proof pointing to it being the real deal now with an Apple Japan online store outing the iPhone 4s alongside an October 14 launch date. It was spotted by MacRumors, where a “Learn More” link on a page showed the iPhone 4S and now seems to have been quickly changed to avoid any trouble.

The translated page stated in Japanese that the iPhone 4S will launch at 8:00 AM on Friday October, 14. Following the past release of the iPhone 4, announced on June 7, up for pre-order June 15, then launched in-store June 24, we can estimate that October 7 is when the pre-orders will begin. This is all speculation of course, and Apple is launching two phones this year, with the iPhone 5 coming much sooner than expected. We’ll know by the end of the day for sure whether or not the iPhone 4s and the iPhone 5 will be announced today, if not, we can expect this October date to be real. The most recent beta version of Apple’s iTunes, according to Ubergizmo, name-checks the “iPhone 4S”.