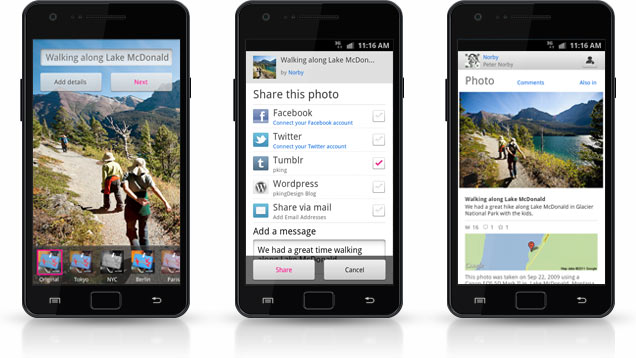 Do you use flickr? How would you like to from your phone? Well, here’s some good news. You can now access the popular photo sharing service with the use of an official Flickr app for Android phones. You may wonder why it took them so long to launch this one but of course, only Flickr can answer that.

The new Flickr app will let you share pictures on the website, as well as Facebook, Tumblr, WordPress, Twitter and other social networking sites that you use. You can also add some fancy filters to your pictures before uploading them just like when using a laptop or a desktop computer. The Android app also supports mapping and tagging, so there is no need to worry about not being able to share the photos with your best friends.

Before you get excited to download the Flickr app from the Android Market for free, you must be informed that this version still lacks a lot of features such as Groups and many more because it is only version 1.0. Since it was just launched recently, maybe it’d be best to give it some time to improve.

Aside from the Android app release, Flickr also launched Photo Session, a new feature that is unfortunately not yet available on the Android app. Photo Session lets users view the same photographs at the same time (up to 10 guests), where the host chooses which pictures to show to the group. Just like a real photo sharing session, except that you dont have to be in the same room.