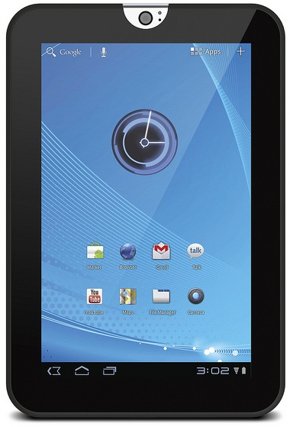 Toshiba seems to be cooking up something in time for the holiday season. No, it’s not your favorite sushi or tempura but some sassy gadgets that will surely make your mouth water as well. The AT 200 is not the only tablet the company is planning to launch when it announced the latest addition to its Thrive Tablet collection—the Thrive 7” Tablet.

As the name suggests, the Thrive 7” Tablet is a 7-inch version of the original which runs on Tegra 2 and possesses a 5 MP and a 2MP cameras, with the rear camera having an LED flash. It also provides a micro-HDMI and mini-USB sockets, docking connector, headphone jack and a micro-SD slot. It is also Wi-Fi, Bluetooth and GPS capable.

The Thrive 7” runs on Android 3.2 and will be rolled out in 16GB and 32GB versions to delight the customers. A Toshiba representative said that the starting price of this new gadget is “less than $400”, and so better prepare this amount if you want to avail of the Thrive 7”.

Some experts were impressed by the Thrive 7” tablet’s 1280 x 800 display which appeared crisp and vivid. The screen also responded very fast on the taps and swipes done by the testers. They said that they are also looking forward to testing Swype on the new Thrive item in the future.

Thrive 7” Tablet will be out in the market on November 2011, so just sit back and relax.