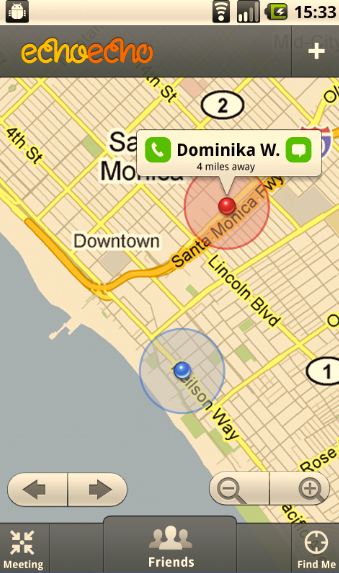 “Where are you?” That’s one of the most common text messages sent, because you want to meet up with a friend or you got separated while shopping at the mall. In fact, over 600 billion text messages are sent in the United States each year posing that exact question. The echoecho app is supposed to streamline that so the core text message is no longer necessary.

It’s a “simple location-based mobile application for finding friends in the real world.” In some ways, you could say that it fits somewhere between Foursquare and Google Latitude, but it’ll work with anyone in your address book without having to reconnect through another social network. It’s available for Android, iOS, BlackBerry and Nokia Symbian, and the announcement this week is that Echoecho has received some serious financial backing in the form of $750,000. That seed funding comes by way of Google Ventures, as well as PROfounders Capital, a venture firm based out of the UK.

You send the “where are you” request and when your friend accepts, both your locations are shown on a graphical map. You can use it to set up meeting places, chat with friends via EchoChat, and share your location via the web with WebEcho. They’ve also worked so that the app “doesn’t destroy the battery life of your phone, broadcast your location to everyone in the world or force you to join yet another social network.”

“Checking in” is the hip thing to do these days, but maybe you don’t want it to be all that public. In any case, you can check out the echoecho app (and download it) through the official website.