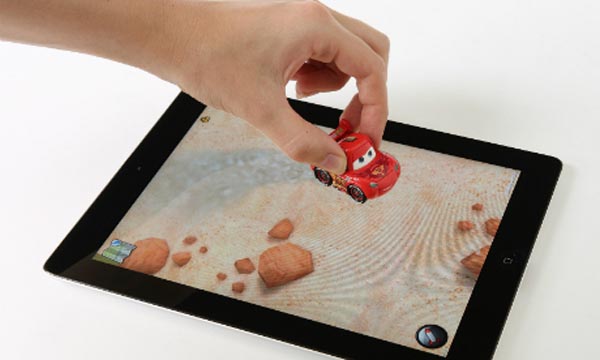 Kids these days don’t know what they’re missing. Instead of playing Scrabble on a physical board, they’re playing Words with Friends on their smartphones. Instead of emptying out a bucket of Lego bricks, they’re constructing new worlds in Minecraft. That’s just not the same, so Disney is working to marry the app the physical worlds with a new series of iPad games and accessories. They’re called Appmates and they’re real toys that work in tandem with the iPad’s touchscreen.

The first in this new series ties in with Pixar’s Cars. The iPad app itself is free and kids (or their parents) can buy the Appmates toy cars through Disney Stores and Apple Stores, both brick-and-mortar and online. One car is £12.99 and a pack of two sells for £19.99. They hit shelves later this month.

The idea is the kid loads the app, places the toy on the screen, and plays the game. They have to pinch the car with their index finger and thumb to complete the capacitive circuit; alternatively, there is a game mode where they can just use their fingers, but then it’d be like any other iPad game for kids. Remember that this is the first in the series and there will likely be other Appmates toys and games for other Disney franchises.

Yes, iPad apps will take away from the usual imagination that the kids would need if they were to play with the toys on their own, but at least they’re exploring new ways to play. [Disney]