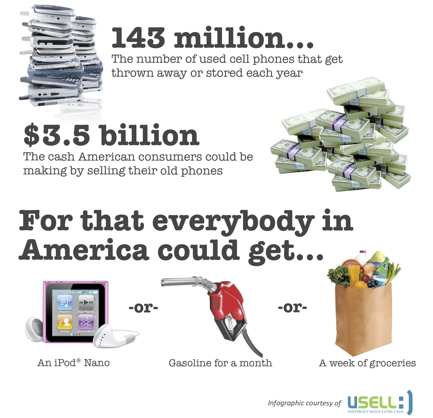 uSell.com has just released an interesting infographic that approaches this very topic. They estimate that 143 million used cell phones will be thrown away or stored this year in the United States alone. These are phones that aren’t being utilized at all. Based on this, uSell estimates that these phones could be converted into $3.5 billion in cash.

This is based on the assumption that the average used cell phone is worth $50, but I’m not sure how they came to that number. I’m pretty sure my old Motorola Z6W isn’t going to fetch $50 on the open market. Even my (marginally newer and smarter) Nokia E71 probably wouldn’t get that. By the same accord, uSell is also saying that an iPhone 4 with “average wear” would “fetch up to $178 today.” Somehow, I think an average iPhone 4 might be worth more than that.

I got an email from the folks at Usell with some clarification about the infographic above. It reads:

Each year, a number of cell phones reach the end of their “first lives.” At this point, the owner must decide whether to discard, recycle, resell, or store the product. In order to determine the number of cell phones that will end their first lives over the next five years, it is necessary to first project cell phone sales into the future. This can be done by examining historical cell phone sales numbers. According to the EPA, cell phone sales grew 14% annually from 2000-2007 from 72 million units in 2000 to 182 million units in 2007. The EPA has not updated its figures beyond 2007, but using a conservative (10%) growth rate we can calculate that 200 million cell phones will be sold in 2008, 220 in 2009, 242 in 2010 and 266 in 2011, and so on.

Assuming that an average phone reaches the end of it’s first life after approximately two years, a phone that was purchased in 2009 would reach the end of its first use cycle by 2011, a phone that was purchased in 2010 would do so in 2012, and so on. Using this methodology, one can estimate the number of cell phones ending their first lives in each of the years from 2011 to 2015. Furthermore, using the EPA’s recent e-waste study, the following assumptions can be made for the destinations of cell phones after their first lives:

From there, we took the amount that will be thrown away, plus the amount that will be stored, to get our 143 million phones that will go to waste in 2011 alone. We then used a conservative $25 average per used phone, though most estimate that the average is closer to $50 per phone, to arrive at a very conservative estimated potential value of $3.5 billion. [Note: Not all phones are worth $50, that is correct (your Motorola Z6W sadly has no value), but that is the average.]

As to your second question, $178 is the highest offer available today through uSell.com’s partners for a 16 GB iPhone 4 with average wear (ie not in perfect condition). Yes, the phone would likely fetch a higher figure through other channels (such as riskier peer-to-peer Craigslist and eBay) however uSell works only with trusted industry leaders in purchasing, refurbishing, and reselling cell phones and other electronic devices. These partners all have strong track records with consumers through their honesty in advertising, customer service, and their support of ethical business practices.