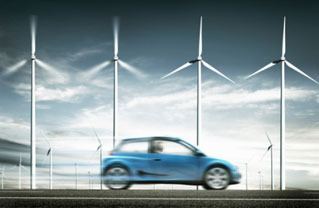 Pollution is one of the most serious problems of this planet. The huge amount of toxins emitted into the atmosphere by large factories and automobiles are detrimental, they rely on harmful fossil fuels to run which contribute greatly to the problem. Carless or car-free cities and other means of getting to places without using cars is much harder to earn widespread adoption. Another way is to divert to electric vehicles.  This is good, but people hesitate from embracing electric vehicles because of misconceptions or fears around range and charging times.  The batteries are also not the friendliest on the planet, and take tonnes of old resources to manufacture themselves.  So people look at them as an inconvenient, temporary patch for a long-term problem.

The concept of a road that keeps the electric vehicle charged while driving is something that is not really new, but recently, Toyota Central R & D Labs, together with Toyohashi University of Technology, are reviving the idea. A “solar highway” that would charge EVs could make the entire EV thing a little more appealing. The construction of this road will involve digging to install metal plates under the surface. These metal plates will be electrified and convert energy through a radio frequency to steel belts in the car’s tires along with the plate sitting above the tire. According to researchers, this could allow electric vehicles of the future to be lighter than they are at present, have greater range, and be able to receive energy from truly renewable sources. At the moment, they are testing the idea.