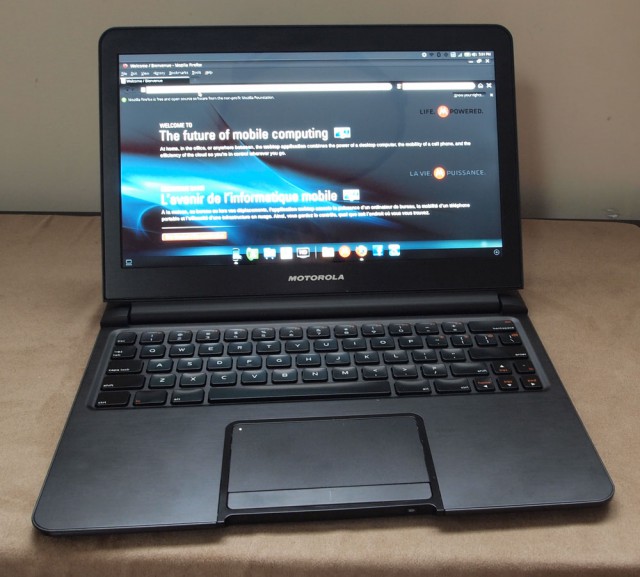 Easily one of the biggest stars coming out of the Consumer Electronics Show earlier this year was the Motorola ATRIX Android smartphone. On the surface, it seemed like any number of other Android smartphones, but it’s that extra functionality that really looked like it was going to be a game changer. But how does that whole docking into a multimedia centre experience really pan out in real life?

Well, I’ve taken the Bell Mobility version of the Motorola Atrix 4G, which should be largely the same as other versions sold by other carriers around the world (AT&T), out for a test drive and now I have returned with my thoughts.

Much like the Samsung Galaxy S II, the Atrix comes equipped with a dual core processor and a full 1GB of RAM. As such, the performance for the Atrix should really be no slouch. The phone initially shipped with Android 2.2 Froyo, but it has since been upgraded to Gingerbread.

The capacitive touchscreen measures 4.0-inches across the diagonal and it boasts a resolution of 540 x 960 pixels, resulting in an effective pixel density of 275ppi. That puts it just shy of Retina Display territory, but most people probably won’t notice the difference. It’s also covered in Gorilla Glass to prevent scratches and other damage. Rounding out the specs are your usual wireless radios — WiFi, 3G, Bluetooth, GPS — as well as dual cameras, 16GB internal storage, microSD expansion, and the MOTOBLUR user interface with live widgets. 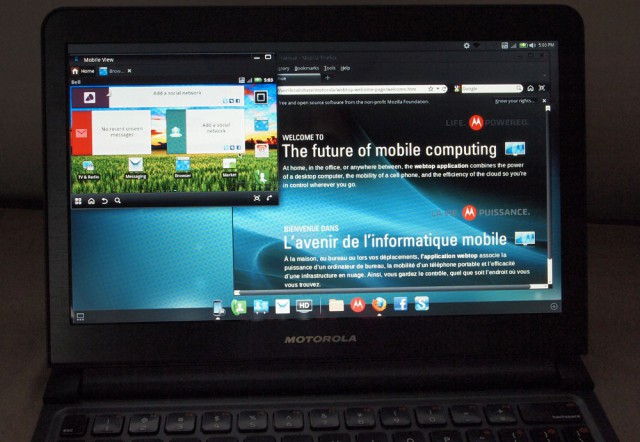 The first thing that struck me about this phone was its plastic construction. I wouldn’t say that it feels cheap, per se, but it is distinctly plastic with quite a slippery back. This is not unlike the Nexus S that I reviewed earlier this year too, except there’s a design on the back and there’s no curved screen.

That said, this appears to be high quality and relatively robust plastic. The other thing that struck me was the placement of the power button, which doubles as a fingerprint reader. Since they wanted the fingerprint reading functionality, the power button is placed on the back toward the top. Again, I’m more accustomed to power buttons on top or on the sides, so this took a little getting used to. It does appear to be Moto’s M.O. to do this, though, since we saw a “back” power button on the Xoom tablet too.

Aside from that, the front side looks much like most other “slate” phones in that the front is mostly all screen. Below it are the four usual touch-sensitive Android buttons. One other thing worth mentioning is the MOTOBLUR UI. I’m personally not a fan of it, but I can’t really explain why. To be fair, I like the TouchWiz UI on Samsungs and that UI has its fair share of naysayers too. 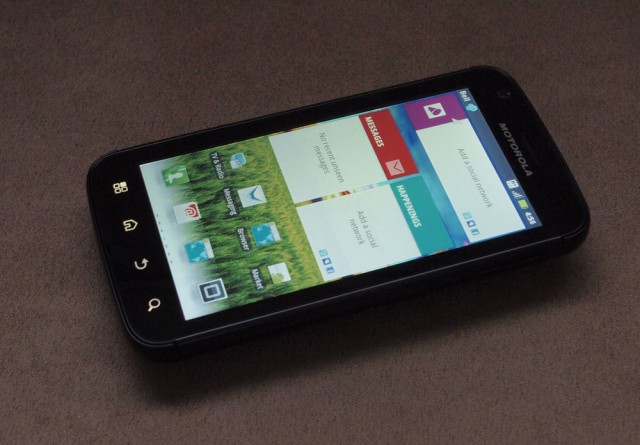 The Lapdock Experience with Webtop UI

This is really what is supposed to set the Atrix apart from all the other Android phones out there. It was a groundbreaking idea when Motorola showed it off at CES. You take your phone, you plunk it into the dock, and you get a netbook-like experience via the Webtop UI.

At least that’s the idea. It’s curious that they went with a “full” build of Firefox when it may have made more sense to go with Chrome, being all Google property and all that. In essence, Webtop is almost like an app that runs from the phone and it is an instant boot Linux-based environment. Without having enough Webtop-focused apps, however, the novelty and utility start to wear off. This is especially true in the age of Android tablets as true alternatives.

Web browsing through the Firefox browser was smooth and you are able to “transfer” your browsing session back to the phone when you undock it. I did find the “island” keyboard to be less than optimal too; the keys were wide enough and had enough key travel, but their “height” (as in the size of the J key between the U and N) was too small. The large trackpad almost got in the way too, as I found my palm accidentally grazing it from time to time while typing.

The Lapdock experience is certainly novel and it is amazing how everything “runs” off the phone itself, but this concept was revealed before Honeycomb really took off. Considering the price of the dock, this proposition isn’t as intriguing anymore. 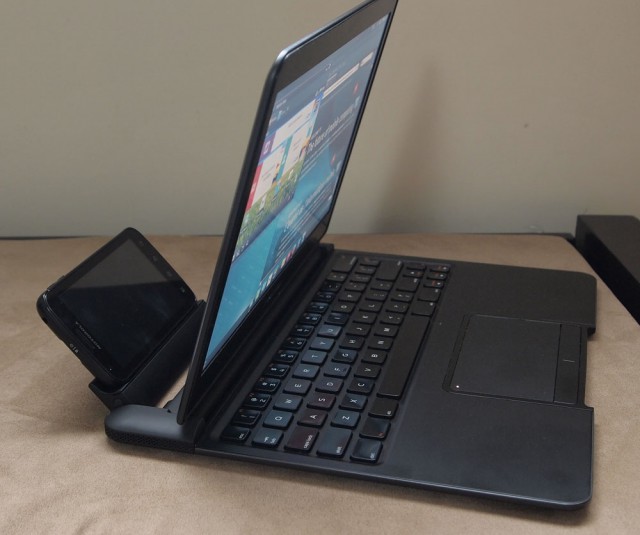 Fundamentally the same idea can be said about the HD Multimedia Dock. This allows for a mini-HDMI output to your HDTV or computer monitor, as well as several USB ports for the keyboards, mice, and other peripherals. You get the same Webtop UI as the laptop dock.

This is an interesting concept, to be sure, but I’m not convinced it’s terribly useful for day-to-day use. I can see how it’d be neat for your living room, using your HDTV as a giant monitor for web browsing and media viewing, but this may not be the most cost effective or simplest way to go about doing it.

To give the Atrix a proper performance test, I ran the Quadrant Standard Benchmark. The Atrix scored 2281 on this benchmark, putting it roughly within the same range as some other Android smartphones powered by dual core processors and full gigs of RAM. This is certainly no slouch when it comes to performance.

It should also be noted that this phone comes with a standard 1930mAh lithium-polymer battery, which is a larger capacity than much of its direct competition. In real world practice, I was easily able to get more than a day with moderate to heavy usage and multiple days with lighter usage. That’s pretty impressive.

I wanted to like the Atrix and the concept of the Webtop user interface and docking stations. I’m not saying that it’s a bad phone at all. The horsepower is impressive, the build quality is solid, and Webtop-ness adds a little extra oomph to the equation. However, I can’t be convinced to spend the kind of money on all these extra accessories when I’d rather spend that money on a separate device altogether.

While the high resolution 4-inch screen was fine, the colors felt quite muted and visibility was poor under more direct light. It’s hard to go back to a screen like this after experiencing the AMOLED, Super AMOLED, and Super AMOLED Plus displays from Samsung. Again, the display isn’t bad, but it does feel distinctly muted. I’m not a fan of the power button placement either.

If I had written this review six months ago, the Atrix may have been a bigger star and it may have earned a higher rating. However, in light of devices like the SGS2 and the pending arrival of Kal-El powered devices, it’s harder to recommend the Atrix today, especially with the price of the accessories. If the laptop dock were included with the phone, though, that’d be an entirely different proposition altogether.