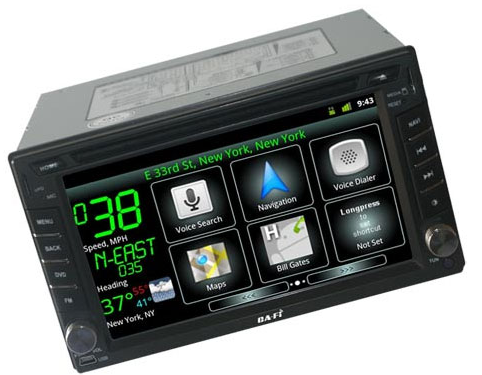 The Google people have been telling us that Android will extend beyond smartphones and tablets for some time. The Ca-Fi system from Innotrends is one such example, as it plunks Android into your car’s dashboard as an aftermarket upgrade.

There’s one little hiccup that you may need to overcome. Many newer models of cars have custom dashboards that may not accept the double-DIN sized Ca-Fi system. There are kits out there that can modify your dash, but it’s not nearly as easy as putting an aftermarket stereo into an ’99 Honda Civic. But it is possible.

As far as the Ca-Fi system itself goes, it is powered by Android 2.3 Gingerbread and a Freescale Cortex A8 i.MX5x processor (1.2GHz). Going along with that is the 6.2-inch touchscreen display (800×480), Bluetooth, USB, and app downloads. I guess it’s pretty cool, but the Android-ness (since I’m assuming it doesn’t have Market access) is largely lost behind that custom GUI anyhow.