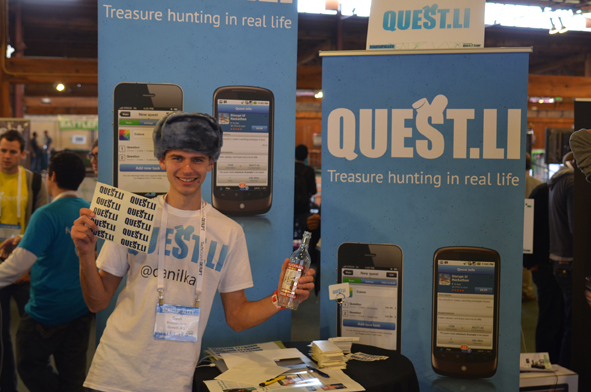 There are a number of gaming platforms out there in the market, and you might be getting confused as to which one suits you. Your friends make recommendations, but these recommendations change. Well, it might be the right time for you to explore Quest.li.

Quest.li is “a gaming platform for smart people and smart games.” The people behind this platform believe that there are more fun ways of enjoying games than just controlling virtual objects on your phone or tablet. Quest.li added that their platform is all about self-realization. Whenever you play a game and you win, it is not because of just merely clicking buttons faster than any creature on the planet but because you are actually smart. Now, that’s another way of looking at the issue at hand, of course.

Quest.li is a mobile application founded by Danil Kozyatnikov with the aim to “turn real life goals into a game.” Just like painting a picture, Kozyatnikov and his team explains that it’s not just about painting with the best paint, canvas and brushes but also the feeling of satisfaction when you have already finished your masterpiece. Indeed, there is an attempt to make the application more personalized. This strategy by Quest.li is a way to attract more people into subscribing to their platform.

In the games created by Quest.li, you can set different goals that will enable you to earn points. Quest.li also promises to do everything it can to provide users with enjoyment based on self-realization. For creating an account, just choose a username, password and an e-mail address. Once you are through with this, you will be presented with the menu: Find, Play, Make, Bank.

Just recently, Quest.li was declared by the audience as the winner at TechCrunch Disrupt. Kozyatnikov traveled all the way from Siberia just to present at the event. He further elaborated that he had different goals to get Quest.li ready. Kozyatnikov also mentioned that users can create their own tasks in the application and that he envisions other people “paying to opt-in to other quests.” Eventually, the winner would gain some amount in return.

The founder also revealed that he does not understand why people compare Quest.li to Foursquare. This is because according to him, these two apps are entirely different. Kozyatnikov added that he wanted to establish a company that would change the gaming landscape. With a team of five more back in Russia, he is in the process of creating the game and making more improvements to cater to the demands of the users. They have been able to raise $225,000 so far, and this amount has been continuously increasing as days pass.