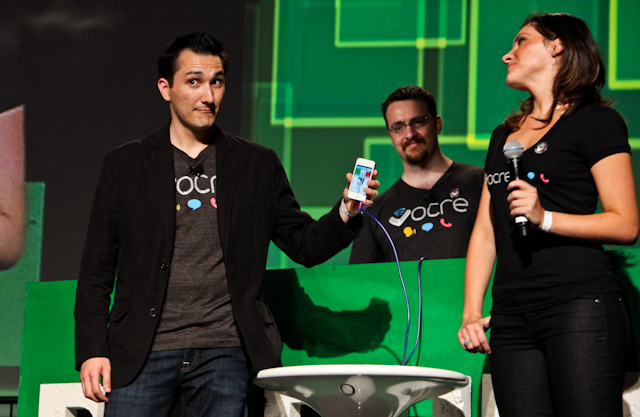 Imagine that you decided to take a trip over to Germany, but you don’t speak a word of German. You could whip out one of those phrasebooks, but there’s a good chance you’re going to butcher the pronunciation, not to mention that you won’t understand what the other person is saying either. That’s where Vocre comes in.

Presented at the TechCrunch Disrupt conference, the Vocre app instantly translates your spoken word into another language. Just say what you want to say, and your smartphone will translate it on the spot and speak it out in the target language. You can then hold your phone in front of the local and have them do the same back to you.

This is quite the fascinating app. It’s not quite instant and you need to wait for the prompts, but it sure beats trying to communicate with charades and broken German. The speech to text part is handled by Nuance, but the translation is said to go beyond Google Translate, using crowd-sourced learning technology. The idea is to mak e the conversation a little more natural.

Right now, it looks like Vocre is being targeted for iOS only. You get your first 10 translations free and then additional packs of 10 more translations are 99 cents. Language support includes English, Spanish, French, German, Italian, Japanese and Chinese. More languages are on the way.

Although we interviewed Vocre and got a demo, the background noise was less than ideal and did not give accurate translations.  It seems Vocre works quite well in quite situations, but if in a noisy restaurant or busy street corner it may not be as accurate as shown in the video.