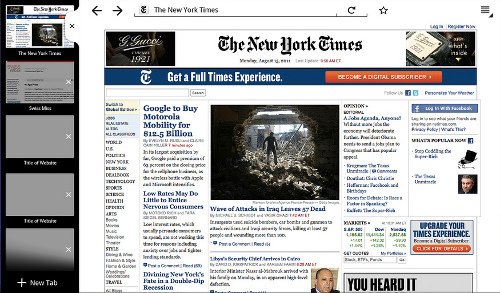 If you’ve been anxious to get your hands on a suitable web browser alternative on your Android tablet, your day has now arrived. The team at Mozilla have been frantically tweaking and fixing bugs, but now they feel that Firefox for Android tablets is ready for the limelight.

That comes with a huge caveat. This is not at all the final release of the tablet web browser and you might not even call it a real beta build. Instead, they’re saying that Firefox for Android tablet has entered the “nightly builds stage,” whatever that means. In any case, this version is being made available publicly.

To get it, you’ll need to direct yourself over to the Nightly Mozilla website and grab the browser in APK form. It handles multiple tabs and has a few other bells and whistles, but since it’s far from a final version, you can expect it to still be littered with bugs and crashes. Such is the life of someone living on the bleeding edge of technology!