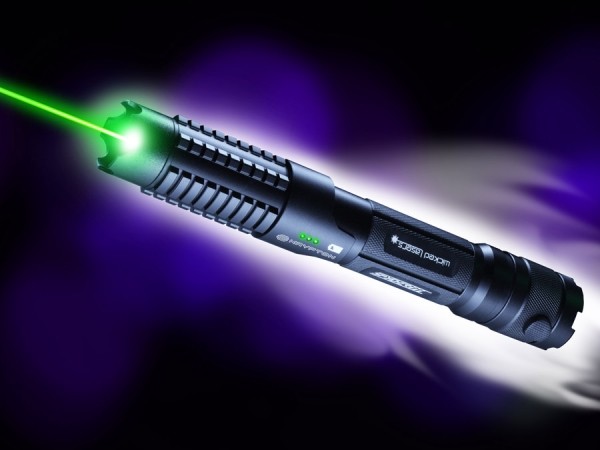 The odyssey of Wicked Laser goes on as they created a new type of laser that is now green and twenty times dangerously brighter than the blue laser, and twenty times as awesome as the ones sold before. For what purpose are you ever going to use this product? Your imagination is the only limitation.

Maybe you can set up a PowerPoint presentation and project it on a humungous white screen that rotates around the Earth, then use Wicked Laser’s S3 Krypton to point out important details on your report. Another thing that you can do is to turn on the laser, point it into the sky and hope that you can spot some aliens wandering around the Solar System and blind them with this gadget. You can buy two pieces, give a piece to your child and let the Star Wars begin! Or you can just purchase one and display it in one of your living room’s shelves and have friends marvel over it. Seriously, there is no one single use for the Wicked Laser S3 Krypton. You can use it anyway you want. Just please don’t point it at anyone’s eyes.

Wicked Laser S3 has a pending status at the Guinness Record for its astounding 86 million lux that is visible from up to 85 miles away, and that is way beyond the planet’s atmosphere as the manufacturing company claims. Sensors and microprocessors are placed in the 85-mile laser’s aircraft grade aluminum chassis to regulate the amount of current in the gadget and to keep the aluminum tube from overheating and burning your hands. The beam might also hurt the skin so be careful when using the laser.

The makers of the laser also claim that the Wicked Laser S3 can be operated 24/7 without any damage to the laser’s diode. Another feature of the S3 is the Smartswitch that can hinder unauthorized users and has nine operation modes—the SOS (Hi/Low), Beacon (Hi/Low) and tactical Hibernation.

Top end models, as well as lower-powered versions of the Wicked Laser product are now available in the market. The former costs around $1000 and the latter around $ 300. As stipulated in its own safety manual, you cannot do anything with this gadget. It is starkly and paradoxically useless, but if you really want to have one for yourself, put on your goggles and pray to God you don’t hurt anyone.