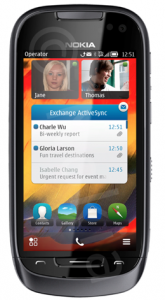 It looks like all the Nokia fans in the audience won’t have to wait for the company’s first Windows Phone 7 (Mango) device to make the leap from Espoo, Finland to Redmond, Washington. It has now been announced that a new suite of software updates dubbed Microsoft Apps are due to arrive on the Symbian Belle platform.

The idea here is to “add some serious business productivity tools for… anybody looking to upgrade from Symbian Anna to Symbian Belle.” Microsoft Apps will be available as a free download in the fourth quarter of this year. It includes Microsoft Lync 2010 Mobile for instant messaging, Microsoft PowerPoint Broadcast for presentations, Microsoft OneNote for note-taking (plus Microsoft SkyDrive sync), and Microsoft Document Connection for viewing documents. SharePoint sync support for OneNote will come in early 2012.

The other big update coming in early 2012 is the addition of Word, Excel and PowerPoint as native applications outside of the Windows platform for the first time. This goes to show that the relationship between Microsoft and Nokia is running deep, going well beyond WP7. Today’s announcement is largely designed to give some hope to all the Symbian folks that Nokia hasn’t completely abandoned the platform just yet and that it’s still worth buying into. Whether you buy into that assertion is up to you.