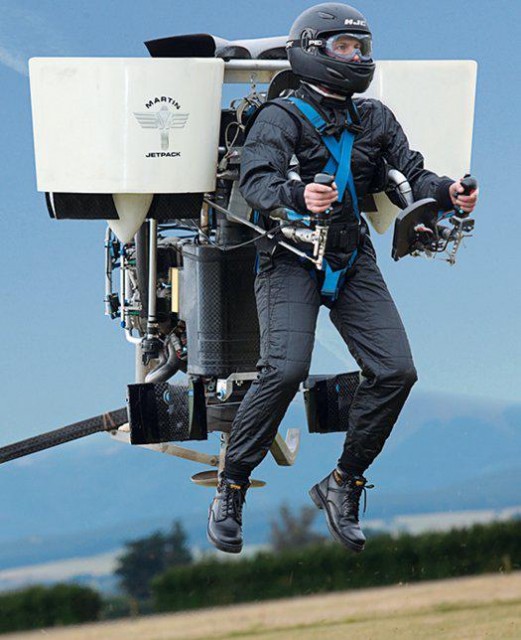 Let’s face it. A water-based jetpack isn’t exactly the most practical way to get to the office, but what about one that uses wind turbines to propel you across the city? That sounds a little more useful, which is why it is utterly awesome to hear that the Martin jetpack will be available in 2012. That’s the good news.

The bad news is that you’ll need to start saving up your allowance money and cash out your retirement fund, because this jetpack is going to put you back a cool $100,000. I guess that’s not terribly expensive in the grand scheme of things, but it’s not the cheapest commuter option either. You might remember the Martin jetpack from when it was first unveiled in prototype form a couple years ago. Some minor tweaks were made, but the commercial version is largely unchanged.

Power comes by way of a two-stroke custom gas engine that is used to spin a pair of ducted fans. That’s where you get your thrust and then steering is done by a an electronic, fly-by-wire system. I think that’s better than the cable and pulley steering that we had seen previously. The jetpack is classified as ultralight under FAA standards, so you won’t need a license either. It is limited to 30 minutes of flight and a max speed of 63mph, though.

Somehow, I imagine we’re going to hear news stories of a bunch of rich idiots crashing these into their yachts and mansions. Sigh, I would love to be a rich idiot.