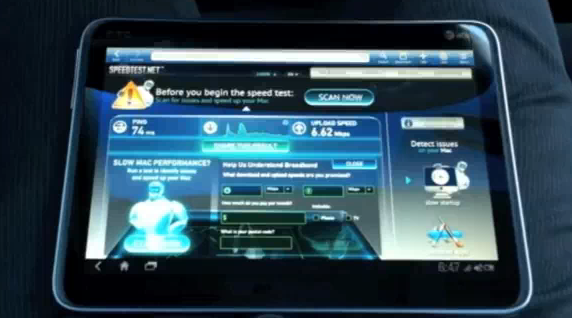 Yeah, we all know that AT&T is referring to their current network as a 4G network, but we also know how the semantics played into that whole equation. So, how is the “real” 4G network from AT&T going to stack up? According to a quick Speedtest on the new LTE network, it’s pretty darn fast… probably faster than many of your home connections.

The video embedded here shows an HTC Jetstream tablet connected to the newfangled AT&T 4G LTE network. It then runs the usual test at Speedtest.net, yielding an impressive 22Mbps download speed. The upload wasn’t as impressive at 6Mbps, but that’s still very fast. Here in Vancouver, while I get 15Mbps down on my lower to mid-range cable Internet line, my upload is 1Mbps at best. So, yes, LTE beats me.

That’s the good news. The bad news is that LTE is only available in four cities right now: Chicago, Atlanta, Dallas, and Houston. The other bit is that there are no unlimited LTE plans that I know of, so the faster speeds will only make you hit your bandwidth cap faster (and incur those overage charges more quickly). Double-edged sword, no?