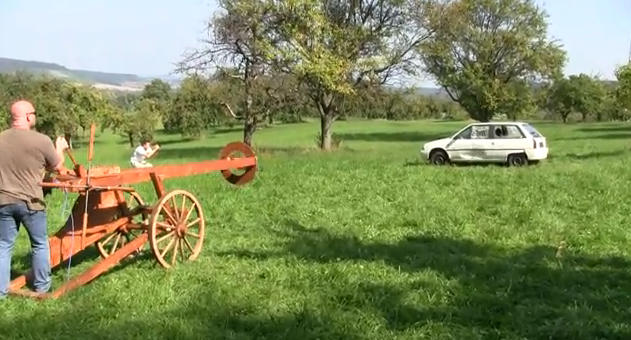 Leave it to people who either have too much time on their hands or are just too enthusiastic about creating weapons of minor destruction. Bearing some resemblance to ancient implements of war, what you see here is the giant Slingshot Cannon. It weighs about 200 pounds and is powerful enough to destroy a small car. With a giant rubber band.

Last year, the inventor made a little toy-sized model that was fully functional with its 8mm steel balls, but that was just a destructive little toy. This year’s model is ten times bigger. And thus, it takes on ten times the size when it comes to its ammunition too, stepping up to 80mm balls that can travel up to 200 meters. This looks like something that deserves to be on Deadliest Warrior, even if it’s not a historic weapon at all.

Power comes from six full Thera Band Gold straps per side, providing 72 times the power of regular “hunterbands” that you would find on something like Bart Simpson’s slingshot. There’s a winch to wind up that power and the cannon is height adjustable to give you better accuracy and range. Yes, it’s really just a big toy for a big boy, but you can destroy a beer keg and a car with this “toy.” Awesome.