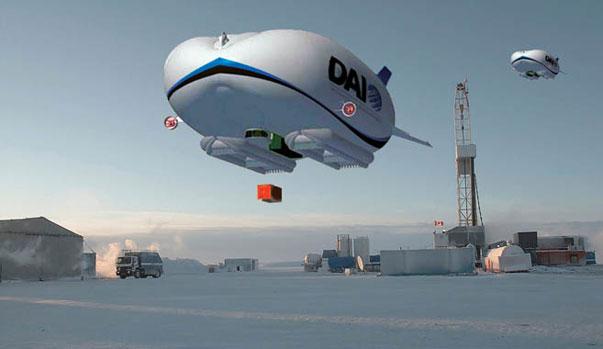 Getting around the frozen tundra of the Great White North can be quite the challenge, especially when it comes to taking off and landing on the icy ground. Well, a British manufacturer is apparently working on some airships for Discovery Air of Yellowknife, supplying remote communities and enterprises in the less hospitable regions of the Canada’s Northwest Territories.

They call them airships, but in layman’s terms, they’re probably better described as futuristic blimps. Hybrid Air Vehicles (HAV) is the company behind the vision and they signed on with Discovery Air Innovations, based out of Quebec, to build the $40 million vehicles. Since it doesn’t need a conventional runway, the airship can land on just about any surface.

The fleet of airships are powered by non-flammable helium and air power, carrying up to 50 tonnes of cargo to remote mining communities, research stations, and other places that may not otherwise be accessible by other vehicles. That’s pretty important. And just because it’s a blimp, doesn’t mean that it’s slow either, traveling at up to 185 km/h (115mph). That’d beat a truck on an ice road any day.