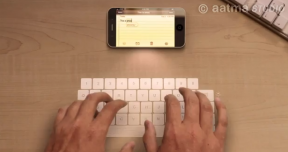 3D animation company AatmaStudio has released a cool concept video for the iPhone 5. It looks awesome, but how likely is it that the iPhone 5 could actually have the features shown in the video?

Smartphones are getting thinner and thinner, with the title of the world’s slimmest smartphone currently held by the Medias N-04C from Japanese company NEC Casio Mobile. At 7.7mm, the Android handset beats both the Galaxy S II and iPhone 4 when it comes to slimness.

The one in the video looks like it could be even thinner than that, but first camera sensors and radios will have to get smaller, as they typically make up the bulky parts. However, OmniVision recently announced an 8-megapixel camera module that comes in at a build height of just 4.4mm. So this aspect of the concept video doesn’t sound too unreasonable. The question is, will people want a smartphone that thin? At what point does it become uncomfortable to hold?

Projection keyboards have existed for several years, but they’re generally not high-resolution or integrated into the smartphone as shown in the video. The projection keyboards on the market are generally dedicated Bluetooth/USB accessories. The Celluon virtual laser keyboard, for example, is fairly small, light and meant for tablets and smartphones, but is a separate component and uses a red laser beam. A couple more years before it is integrated into the smartphone, perhaps? iPhone 7?

Projecting video into thin air without any sort of screen to reflect the light is a bit trickier. Some say it’s just not possible. What do you think? Could we be seeing stuff like this on the iPhone 5, or will this be more of the kind of stuff we’d see on an iPhone 10?