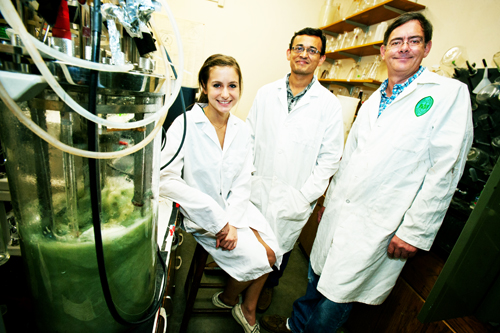 Imagine if all it took to create biofuel was your Sunday paper. How great would it be if you could chuck your newspaper into a machine and it would come out as fuel for your car? We’re nowhere near that level of sophistication, but a team of scientists at New Orleans’ Tulane University have found something promising.

The scientists discovered a microorganism that converts cellulose into butanol, which can be substituted for gasoline. The scientists first found the organism, named TU-103, in animal droppings. Once they cultivated it, they found success using newspapers as the cellulose source in the patent-pending process. The advantage of using this organism is that it is able to produce butanol in the presence of oxygen, while other butanol-producing bacteria require an oxygen-free environment, which increases production costs.

“Cellulose is found in all green plants, and is the most abundant organic material on earth, and converting it into butanol is the dream of many,” said team member Harshad Velankar. “In the United States alone, at least 323 million tons of cellulosic materials that could be used to produce butanol are thrown out each year.”

Although ethanol is also derived from cellulose, butanol is reportedly superior to that biofuel as it can be used in place of gasoline with no engine or fuel system changes, can be pumped through existing pipelines, is less corrosive, and contains more energy.

“As a fuel, bio-butanol produced from cellulose would dramatically reduce carbon dioxide and smog emissions in comparison to gasoline, and have a positive impact on landfill waste,” said David Mullin, whose lab in Tulane’s Department of Cell and Molecular Biology was the location of the research.

If you don’t subscribe to newspapers, you probably get a heap of flyers every month. Wouldn’t it be satisfying if that stuff could be turned into fuel, instead of being recycled into more ads? Or, what about cellulose materials that can’t be recycled into other paper? While we’ve been eagerly awaiting biofuel made from algae or a by-product of tequila, it would be a great way to get rid of all that paper waste floating around.