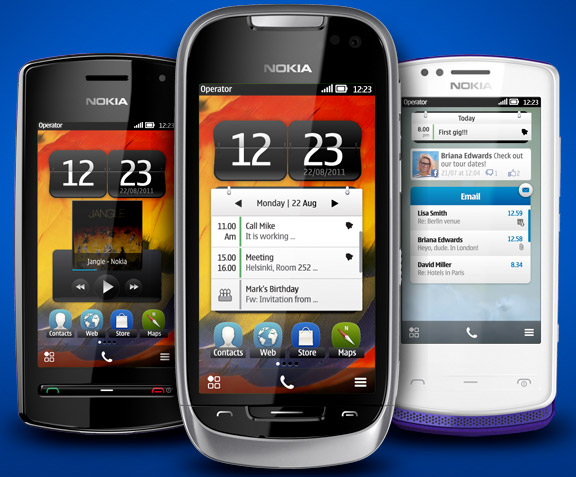 Moving forward, we thought that Nokia was largely dedicated to the Windows Phone 7 platform, but it looks like they’re not quite ready to give up on Symbian just yet. In fact, they just created a new updated version called Symbian Belle and it’s being offered in three new smartphones: the Nokia 600, Nokia 701, and the Nokia 700.

The “all-new” Symbian Belle lets you personalize up to six home screens with dynamic “live” widgets, view notifications in a new pull down menu, enjoy “PC-like” web browsing, share content using NFC, and navigate with free Nokia Maps. So, it’s like the Symbian we’ve already seen on other Nokia devices, but with a few Android-esque alterations. Multitasking is done by flicking across live images of your open apps, not unlike webOS.

As far as the phones themselves, they all get 1GHz processors and the usual assortment of wireless connectivity. The Nokia 600 (photo left) has a 3.2-inhch touchscreen and a 5MP fixed focus camera, the Nokia 700 (photo right) bumps up to a 3.2-inch AMOLED display, and the Nokia 701 (photo center) has a 3.5-inch LED-backlit IPS TFT touchscreen. All three are expected to ship in Q3 of this year.

And so, not unlike RIM, I think Nokia has somehow found itself between a rock and a hard place. They want to keep selling current devices, but everyone knows what’s around the corner. Symbian Belle could just be Nokia’s version of BB7, with WP7 playing the role of QNX.

Espoo, Finland and Hong Kong – Nokia today announced the launch of three feature-packed, mass market smartphones, bringing the latest smartphone functionality at attractive price points and including market-leading innovation with Symbian Belle. The Nokia 700, Nokia 701 and Nokia 600 extend the range of available designs, features and functionality in the Nokia Symbian smartphone range. Symbian Belle powers all three, with single-tap NFC technology sharing and pairing, the most personal user interface so far and a more powerful mobile Web browsing experience. As well as allowing content to be shared between devices, NFC capabilities allow any of the three new smartphones to pair with NFC-enabled mobile accessories such as speakers or Bluetooth headphones and headsets. To extend the range of available NFC-enabled accessories, Nokia is also announcing the launch of the Nokia Essence Bluetooth Stereo Headset, which can be paired with any NFC-enabled smartphone simply by tapping the two devices together.

While all three smartphones contain recognizable Nokia features, they each represent a very distinct set of priorities to allow users to choose what matters most in a smartphone. The most compact touch screen monoblock smartphone in the world (Nokia 700); a sleek and stylish smartphone with the world’s brightest mobile display for indoor or outdoor use (Nokia 701), and Nokia’s loudest entertainment smartphone (Nokia 600) all bring firsts to the Nokia product portfolio.

“After bringing exciting new features to the Symbian user experience only two months ago with Symbian Anna, we are now driving the platform even further with our most competitive Symbian user experience ever,” said Ilari Nurmi, Vice President at Nokia. “Symbian Belle and the three new handsets we are launching today show our commitment to continue delivering Symbian products that allow people to choose what is most important to them in terms of user experience, design, functionality and price. These will not be last products or updates we will deliver on Symbian.”

“With the announcement today Nokia has made it clear that Symbian will continue to play an important role in its product portfolio along side Windows Phone 7” said Nick McQuire IDC. “There is a sense of urgency in the way improvements and innovation are being delivered to the platform that demonstrates how committed Nokia is to make Symbian products a competitive smartphone choice.”

Nokia 700: Nokia’s smallest smartphone
At only 50 cubic centimetres, weighing 96gm and at 110 x 50.7 x 9.7 mm, the Nokia 700 not only becomes Nokia’s most compact smartphone in the Symbian range, it is the most compact touch monoblock smartphone in the world. What it lacks in size it makes up for in functionality, with single-tap NFC sharing and pairing capabilities, a 1Ghz processor, 3.2 inch AMOLED screen ClearBlack display, 2GB of internal memory (with the option of using a 32GB microSD card for a total of 34GB), HD video capture and 5MP full focus camera with LED flash. The Nokia 700 is also Nokia’s most eco-friendly smartphone. With a long battery life, extensive use of eco-friendly materials and features to minimize battery consumption, it is the perfect smartphone for any environmentally-conscious smartphone user.

Nokia 701: Nokia’s brightest smartphone
Nokia 701 The Nokia 701 is a sleek, slim smartphone incorporating the world’s brightest ever mobile phone display, based on a 3.5 inch ClearBlack display that makes it perfect for indoor and outdoor use. It also has active noise cancellation for the clearest sound quality and, like the other new smartphones, provides single-tap NFC pairing and sharing capabilities, allowing content to be shared and sound to be streamed wirelessly to headphones and NFC-enabled speakers.

Based on the popular Nokia C7 design, the Nokia 701 smartphone also has a 1GHz processor, 8MP full focus camera with dual LED flash and 2 X digital zoom, 2nd front-facing camera and HD video capture. It comes with 8GB internal memory and the possibility to increase to 40GB by installing a 32GB microSD card.

The Nokia 600 smartphone delivers a big sound and a big personality in a small package and is Nokia’s loudest at 106 Phons. With built-in FM radio antenna for listening to radio without headphones and FM transmitter that makes it possible to broadcast music from your phone to any FM radio, the Nokia 600 is a music-lover’s dream. With 60 hours of music playback time, an incredibly powerful internal loudspeaker and the ability to also stream music wirelessly to NFC-enabled accessories, it is the perfect smartphone to get the party started.

Available at a lower price point than the Nokia 700 and Nokia 701, the Nokia 600 still comes with a 1 GHz processor; 5MP full focus camera with LED flash and HD video capture, and 2GB of internal memory with ability to increase to 34GB using a 32GB microSD card.

Symbian Belle is the latest in a series of planned software updates to the Symbian platform, which started with Symbian Anna and will continue into 2012. Symbian Belle increases the number of home screens from three to six providing more room to display applications and services. Live widgets, now come in five different sizes, making the home screens come alive and giving users more flexibility to personalize the user experience. It also includes a pull down menu and taskbar to access notifications from any of the home screens and further enhancements to the Web browsing experience. All in all, Symbian Belle provides Nokia’s most competitive, seamless and intuitive Symbian experience so far.

One of Symbian Belle’s most exciting features is the single-tap NFC sharing and pairing capability. This allows contacts, videos and images to be shared with other NFC-enabled devices and smartphones, as well as pairing with NFC-enabled mobile accessories such as speakers and headsets. Gaming fans also benefit from the NFC capabilities of the new handsets with the ability to unlock additional levels in Angry Birds or find a hidden blade in Fruit Ninja just by touching two NFC-enabled devices together. On the Nokia 701 smartphone, which comes preloaded with Asphalt 5, two friends can even pair to compete on the same racetrack.