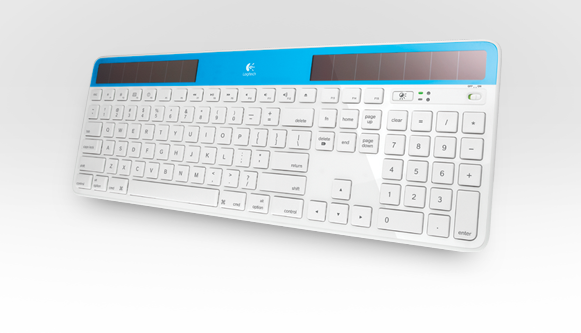 Logitech’s Wireless Solar Keyboard K750 won over the Windows crowd when it was released last year, and it also worked for Mac. But Apple lovers missed some of the keys exclusive to the Mac. Now Logitech has released a Mac edition of the K750, complete with command keys and the eject key, and features four different hues.

The 1/3 -inch thick keyboard works using 2.4 GHz wireless connectivity via a small Unifying receiver, so Bluetooth fans will be disappointed. Yes, you’re going to have to give up a USB port to a dongle, which may be a dealbreaker to some.

The keyboard works right out of the box, so no software installation is required. The beauty of this keyboard is that it charges itself with sunlight or lamplight, so you’re good indoors or outdoors. On a full charge it works for at least three months, even in total darkness.

You can pre-order the keyboard for $59.99, and they should start shipping in September.