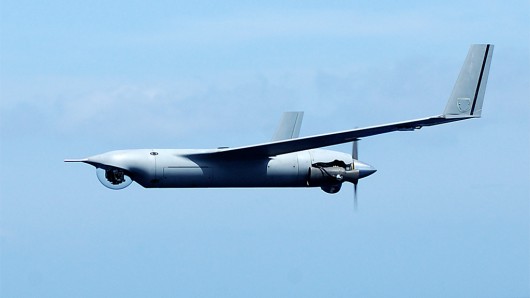 What comes to mind when you think of killer bees? Danger? Pain? Chaos and death? Or what do you think of when you’re out fishing, and those awful clouds of mosquitos cluster over your head, taking turns at draining you of your sweet, sweet life juices? Maybe “annoyance” or “west nile” comes to mind.

For Boeing, these things paradoxically muster up delusions of efficient search and rescue, among other benevolent concepts. The aeronautics company’s newest “swarm” technology, inspired by the flight and teamwork of insects, is their answer to unmanned aerial vehicles working together as an intelligent group.

Tests in eastern Oregon last month saw different types of UAVs — two Insitu-manufactured ScanEagles and one Procerus Unicorn from The Johns Hopkins University Applied Physics Laboratory — working together using the swarm system to map out the terrain and create waypoints for teams on the ground.

“This is a milestone in UAV flight,” said Gabriel Santander, Boeing Advanced Autonomous Networks program director and team leader. “The test team proved that these unmanned aircraft can collect and use data while communicating with each other to support a unified mission.”

The “decentralized swarm technology” test flights, according to JHU/APL principal investigator Dave Scheidt, could potentially improve response times and allow for fewer staff on reconnaissance and search-and-rescue missions. Though swarm is still in its early stages, further tests and demonstrations are planned for early autumn this year.