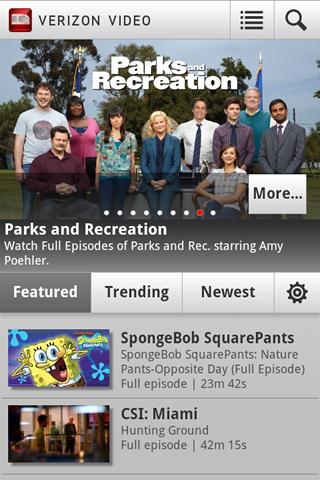 I see what you did there. Verizon has long had its V CAST service for a variety of multimedia entertainment, but some people have linked V CAST to “feature” phones rather than full-on smartphones. V CAST sounds like something from a few years ago anyway. So Big Red has decided to do a little rebranding by unleashing “Verizon Video” to the Google-fueled masses.

In essence, you are able to watch a bunch of your favorite television shows on your preferred Anroid device, whether that be a smartphone or a tablet. It’s not unlike V CAST Video, except that they’ve upgraded the quality of the video content and expanded the selection. In addition to over 250 full episodes of TV shows, you’ve got local and national news, sports, weather and so on.

The good news is that the Verizon Video Android app is a free download. The bad news, and you knew this was coming, is that the service is not free. You either pay $3 a day or $10 a month to gain access to the video content. This works over your 3G/4G connection and, to make matters worse, the video content you stream does incur data usage that “will be billed according to the customer’s data package.”