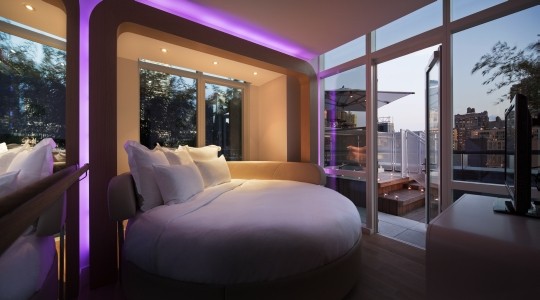 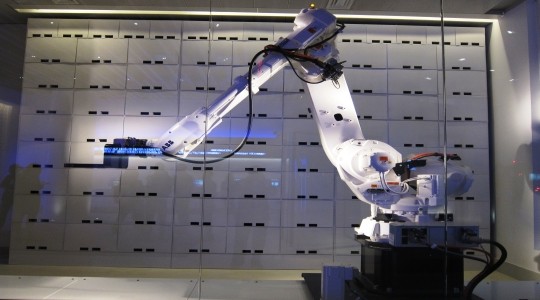 Not only do the Yotel chain of hotels have a fully automated check-in service so you don’t have to deal with any annoying, perky humans in your jet-lagged state, but the Yotel in New York will also feature a robotic baggage drop-off machine. Touted as the world’s first hotel robotic luggage handler, “Yobot” loads and stores your luggage. If you don’t need your luggage, that’s great. But if you do, wouldn’t it be handier if your robot could carry it to your room for you? I’m curious as to if they have real maids or if they just have those robot vacuums.

The Yotel chain of hotels, with additional locations in London and Amsterdam, seek to create a “’first class experience at an affordable price.” The hotels feature sleek, functional design and “smart space.” The airport hotels in London and Amsterdam are located in terminal buildings and offer a cabin experience where you can book for four hours or longer at prices starting at US$40 for four hours. You can choose from a single cabin, double cabins and twin cabins.

The first Yotel hotel was created back in 2007 by founders Simon Woodroffe and Gerard Greene. Woodroffe first thought of the idea after being upgraded into first class on a British Airways flight. He wanted to bring the luxury of first class into a small yet stylish cabin where weary travellors could spend a few hours or more while waiting for their connecting flights. In June 2011 a Yotel was opened in New York, just two blocks from Times Square.

The New York Yotel will exclusively have the Yobot luggage service. Some of the perks to the Yotels, beside the Yobot, include a bed that transforms into a space-saving lounging position when you push a buttom, a Techno Wall that houses a flat screen TV and storage components, and a bathroom wrapped in glass. Premium cabins start at US$179 per night.