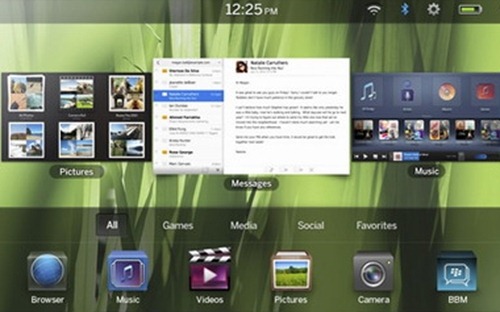 An obvious trend that has emerged in the last few years is that people like smartphones with giant touchscreens and they’re getting less interested in having physical keyboards. While e-mail remains at the heart of the BlackBerry business, RIM recognizes that touchscreens are the present and the future. And that’s why the upcoming QNX-powered Colt superphone will be all touchscreen.

At least, that’s what the rumors are leading us to believe. Apparently, the BlackBerry Colt will be RIM’s equivalent to the emerging Android superphones with touchscreens of four inches or bigger. Maybe. At least we’re hearing that the Colt will rock a display that’s “possibly” bigger than 3.7-inches. Unlike the current Storm and Torch, the BlackBerry Colt sounds like it’ll do away with the trackpad too.

Naturally, the QNX operating system — which currently runs the PlayBook tablet — will be the real star here and that’s possibly why many RIM fans are holding off on BB7 devices. Oddly though, the Colt is rumored to have just a single core 1GHz processor. Considering that the BlackBerry superphone won’t launch until Q1 2012, that puts it in a similar release window as NVIDIA Tegra 3 “Kal-El”… which is a quad core mobile processor. Much like the PlayBook, will the Colt be a matter of too little, too late, missed the boat and doesn’t even have a paddle?