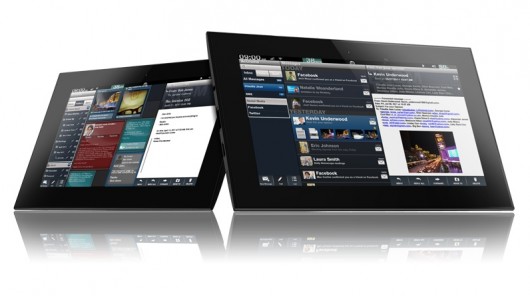 Remember the JooJoo? It started out its life as the CrunchPad by Michael Arrington of TechCrunch and via all sorts of legal hullabaloo, it ended up being sold only under the Fusion Garage banner when the Linux-based tablet launched in 2009. It didn’t do so well, but Fusion Garage is back with a couple of other offerings.

What you see here are the Grid10 tablet and the Grid4 smartphone. While they may appear to be just your run of of the mill Android devices, they’re not. Instead, Fusion Garage has taken the Android kernel and built around it to create a custom operating system called GridOS. As if we didn’t already have enough platforms already, right? Maybe they should have just done the skin thing like HTC, Samsung, and Motorola.

In any case, the Grid10 tablet features a 10.1-inch multi-touch display (1366×768) and is powered by an NVIDIA Tegra 2 processor at 1.2GHz. That gets backed with 16GB storage, 512MB memory, microSD slot, WiFi, Bluetooth 2.1+EDR, 1.3MP front camera, HDMI out, GPS, accelerometer, and 5800mAh battery, as well as optional HSDPA. The GridOS itself is gesture and wheel based: tapping on the screen brings up a wheel of options. Apps come by way of the Grid Shop, but apparently it supports Android Market apps too. Pricing starts at $499 for the WiFi-only model and an extra $100 gets you 3G. Shipping starts September 15.

The Grid4 smartphone is similar, only smaller and with a different processor. Behind the 4-inch screen is a Qualcomm Snapdragon MSM8255 and 512MB of RAM. Rounding out the specs are the 5MP camera and VGA front camera. The app support and GridOS are the same. Expect it to ship in Q4 for $399.