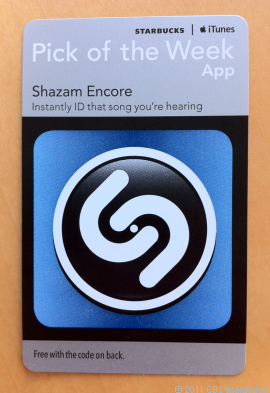 Need more incentive to sip overpriced lattes at Starbucks? Sure, they’ve got Wi-Fi. They offer free songs via iTunes. But is that really enough to balance out your $6 venti super-caff two-and-a-quarter-pump shaken-not-stirred vanilla soy tazo twister? Apparently Starbucks doesn’t think so. Which is why the company, along with Apple, will start giving out free “App of the Week” cards to their customers.

The first app set for gratuity is Shazam Encore, the $5.99 iOS app that helps you identify songs playing on the radio, in the pub — or in Starbucks. Shazam probably wasn’t a very difficult choice for the “baristas.” I know I’ve budged long queues and disrupted the counter staff on more than a handful of occasions with a “Hey, what’s this song called?” or “Is this Jack Johnson? Sure sounds like Jack Johnson” or “Whose iPod is hooked up to this thing? We should hang out.”

I don’t think the offer will be easy for customers to pass up, given the popularity these little games and things hold in consumers’ lives right now. Songs are pretty subjective to people’s widely-varying tastes, but — at least in my opinion — apps are more about usefulness or entertainment. Each app will probably appeal to a wider demographic than each song, meaning more hype. Plus, the sweetness of something actually useful will far outlast the sugary drink syrups and folk-pop tracks.

So, free apps: Starbucks wins, and if you don’t get the most expensive drink on the menu, you win, too.