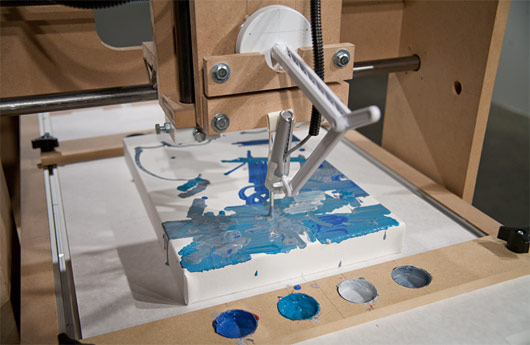 The rapid improvements in Artificial Intelligence in the past decade have manifested themselves most recently in Watson, IBM’s supercomputer that obliterated the human competition in Jeopardy, and from Taiwan, an anthropomorphic robot head that uses cameras built into its eyes to read sheet music and sing while making twitchy facial expressions. With AI becoming more and more complex, it begs a very old question; do androids dream of electric sheep? Visual artist Benjamin Grosser asks us more philosophical questions, “As these systems grow in complexity, or intelligence, how does that intelligence change what passes through them? Further, how does that intelligence evolve to make its own work for its own needs?” Could a machine be original or creative? To deal with all these existential musings, Grosser has created an Interactive Robotic Painting Machine that uses sounds from the environment to inspire its art. According to Grosser, the machine even responds to criticism. Check out the painting robot in the video.