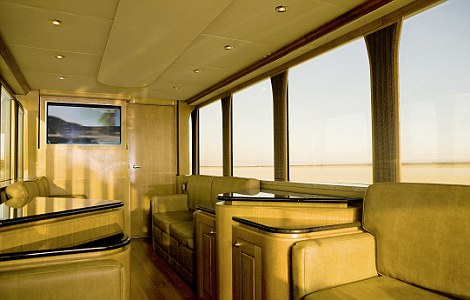 Remember camping? Living on the land, sleeping in a tent and peeing on trees. Roasting marshmallows. The excitement of leaving your creature comforts at home and living like a real mammal, taking your primal instincts for a test drive and all that.

Apparently this is not how some people roll.

People like Ashton Kutcher. If his 1,100 square-foot semi “trailer” leaves him feeling closer to nature while he’s working on the set of Two and a Half Men, I can’t imagine his house. Complete with seven flat-screen TVs, two levels, two bathrooms, granite countertops and a conference space, this behemoth needs hydraulic expansion and retraction areas to meet U.S. transportation laws’ size requirements while on the road. What’s more, the stereo even knows to turn itself down when the doorbell rings. Yes, it has a doorbell.

As if that wasn’t enough, they’re already working on a three-floor version: The Sky Box.