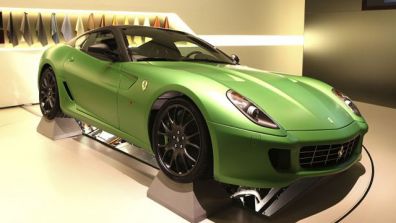 There is certainly a push towards having more environmentally friendly vehicles these days. Between the Volt, Leaf, Tesla, RAV4 EV, and countless others, electric vehicles seem to be picking up steam. But not in Italy. In fact, Ferrari president Luca di Montezemelo has stated explicitly that there will never be an electric car under the famed horse brand.

“You will never see a Ferrari electric because I don’t believe in electric cars, because I don’t think they represent an important step forward for pollution or CO2 or the environment. But, we are working very, very hard on the hybrid Ferrari. This should be the future, and I hope in a couple of years you can see it.”

Kudos. I think we all have to recognize that while it is certainly worthwhile to consider how we can be more environmentally friendly in our daily commutes, supercars like Ferraris fall under a different category altogether. They’re not about getting MPGs and reducing CO2s; they’re about getting more MPH and faster times around the Nurburgring. They are true racing machines, and except for the occasional mid-life crisis and rap video, we don’t see them on our roads anyway. I wonder what Montezemelo would think about the EV Cup coming to the US this November.

Though it’s odd that after shooting down EVs he says hybrids are something they’re working on. Watch it be a 400hp gas engine mated with a 5hp electric assist.