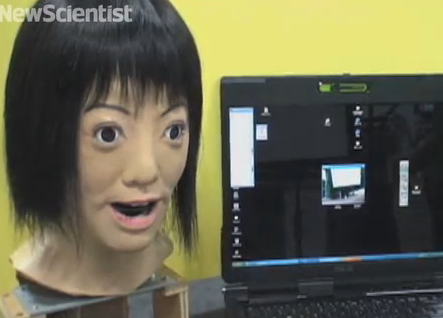 This famous Warren Bennis prediction has been coming closer and closer to reality with each passing year, but new technologies are suggesting Artificial Intelligence may not be contained to the manufacturing industries forever. In fact, it might not be long before human customer service workers and receptionists are a thing of the past.

Earlier this year, tech enthusiasts and old folks’ homes around the world watched as IBM’s Watson robot destroyed its competition on Jeopardy. As Watson was an AI-focussed creation — a synthetic human-like “mind” encased in a mass of computer equipment — it was the perfect candidate to someday put millions of specialized call-centre staffers around the globe out of work. IBM is also working to develop a Watson system that will be able to help diagnose patients in hospitals to help with tricky symptoms and, hopefully, cut down on hospital wait times.

But with its huge physical size and no in-person interaction or interface, Watson is bound to virtual applications for the time being. So what about the receptionists I mentioned? Don’t worry: Chyi-Yeu Lin and colleagues at the National Taiwan University of Science and Technology have built a singing, disembodied animatronic robot head that will someday put every last unskilled desk clerk and Walmart greeter in the unemployment line once and for all.

So far, the anthropomorphic robot can use the cameras built into its eyes to read sheet music — including lyrics in 40 different languages, calculate pitch, tempo, rhythm and even emotion – and sing the song back while making facial expressions to match (see video below). So far, this is a neat parlour trick and, with its remarkably creepy face and jerky jaw movements, it might be a good fit for Chucky Cheese’s animatronic kiddie-concert line-up. But with a bit more development, the implications are huge.

With cameras in the eyes and such advanced optical recognition software, this thing could do away with almost the entire front-end staff at a pub: The bouncer (checking IDs at the door), the bar clerk (taking drink and food orders for the bartender and kitchen staff, keeping track of tabs, charging customers, etc); not to mention the entertainment (songs by request, karaoke duet partner for those with no friends).

That said, trying to interact with this thing in person in its current state — especially while getting smashed — might make it hard to keep your drinks down.

As mentioned by Leslie Katz of Cnet’s Crave blog, humans have a psychological defense mechanism that makes things like Taiwan’s robot head look absolutely repulsive: The “Uncanny Valley” theory, which shows humans are disproportionately disgusted and unempathetic towards things which look almost human but have subtle, noticeable differences. It’s the point at which our minds stop seeing a robot doing a good job of acting human, and start seeing a human who’s either heavily diseased or just doing a terrible job of acting normal.

There are some obvious fixes for this problem. For one, let the robotics specialists do their thing, but source out the “skin and hair” work to the guys who made Mission Impossible 2. Some help with the jaw animatronics wouldn’t hurt, either, especially to overcome that ridiculous, confused-looking gape the robot head has while reading.

But since this Uncanny Valley response seems to be strongest to the things that resemble humans, why not have some fun with this thing? Rather than the Mission Impossible guys, why not hire Tim Burton’s crew? We have the chance here to make our receptionists and greeters look like whatever we want them to look like. They could resemble the mascot of the business where they’re installed. They could look like Predator. This is our chance to make a whole faux-species of customer service workers, and if it’s going to make global unemployment numbers spike, we might as well milk some amusement out of it.

But if this robotic head is being trained to interface with humans for service jobs with very little knowledge after that, and Watson is being trained to become the most helpful database of knowledge for professional applications but lacks any sort of personal human-to-humanoid interface, the real question becomes “how and when will the two be combined?”