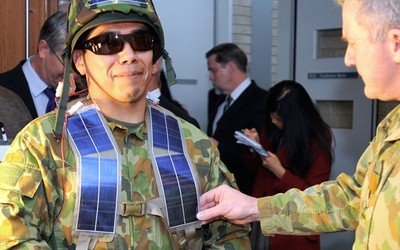 Let’s say you are out “peace-keeping” in somewhere like Afghanistan. You’re baking their under the hot desert sun and your tactical tablet device is running out of juice. That’s probably more common than we think when it comes to today’s military efforts, but the Australian National University (ANU) has come up with a relatively straightforward solution: solar panels on vests.

The idea is to patch these lightweight wearable solar panels onto the garb of the soldiers in the field. They can have them attached to their helmets, clothing, backpacks, tents, weapons, equipment and whatever else. The silver solar panels are somewhat bendable, so they should be able to wrap around the contours accordingly.

In doing so, the soldiers get a near constant supply of power for various electronics and communication equipment. It won’t be quite as useful for nighttime missions, but the stored power from the day could be still utilized. I think another concern would be, well, the solar panels kind of ruin the camouflage of their usual garb, don’t you think?