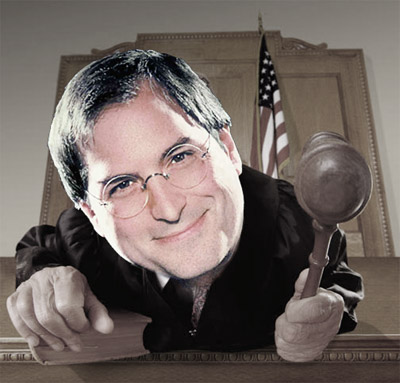 Well, that’s mildly passive aggressive of Steve Jobs, don’t you think? By now, you’ve surely heard about all the patent infringement lawsuits that Apple has launched against companies like Samsung, but it looks like the real target isn’t these manufacturers at all: it’s Google.

Think about that for a moment. Rather than going after the Googs directly, Apple is systematically approaching the various manufacturers that produce Android tablets. In addition to Samsung, Apple also has active legal battles with the likes of Motorola and HTC, among others, citing “slavish copying” of the Apple design.

Apple has already managed to block sales of the Galaxy Tab 10.1 in Australia and the EU, for instance. Perhaps Apple’s legal team thinks that it’s easier going after specific products in specific markets, rather than launching a broad-sweeping battle against the entire Google Android operating system and ecosystem. One way to beat the competition is to prevent them from selling their products in the first place.

Android has already usurped iOS on the smartphone front and it’s steadily picking up pace with tablets too. In fact, projections have Android tablet sales skyrocketing to 230 million by 2015. Compare that to last year’s 20 million. By going after the manufacturers, Apple could charge them licensing fees to use Apple-esque features that are found in Android, making the latter OS less “free” to implement.