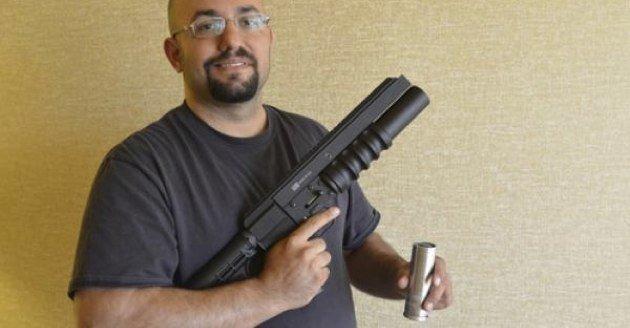 Civilians don’t normally get to experience military-class devices, but there are times when such devices inspire civilian enforcement equipment. An Israeli surveillance device has been such inspiration for hackers Vlad Gostom and Joshua Marpet, the duo have come up with a DIY launchable camera that was unveild at this year’s Defcon.

The camera resembles a 40mm military grenade launcher, but the only thing this device could launch is an aerial view. The adapted grenade launcher sends a wireless camera 500 feet in the air and sends the images back via a 5.8 GHz wireless receiver before hitting the ground. The image would only last seconds, but it could be enough for providing an overall view of the area.

The first time Gostom and Marpet tested the Firefly, it wasn’t quite successful. They used a 37mm flare gun to launch the camera and it only made it to 30 ft in the air. The distance wasn’t enough for the images to be relayed back to the receiver. But they seem to have improved their device and their final version could even be ready for purchase. The two are planning to sell the firefly at $500.