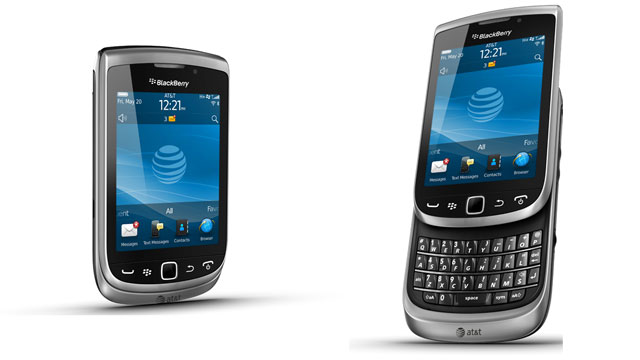 I’m not at all convinced that the updated platform will somehow skyrocket RIM out of its current woes, but I guess it can’t hurt that much either. BlackBerry OS 7 is just around the corner and both AT&T and Sprint want to be the first ones to offer the American public a taste of the new operating system… so, they’ve announced their upcoming BB7 phones.

On the AT&T side of the equation, they’ll have three phones with BlackBerry OS 7. First, the BlackBerry Torch 9810 is much like the older Torch, except it’s been rehashed with a faster 1.2GHz processor, HD 3.2-inch screen, 8GB internal memory, and HSPA+. You can expect that to launch this month. Also coming to AT&T with BB OS7 are the Bold 9900 and the Torch 9860, the latter of which is AT&T’s first touchscreen-only ‘Berry. Those two should launch later this year.

On the Sprint side of things, they’re moving forward with BlackBerry 7 by providing two handset choices. The BlackBerry Bold 9930 is essentially a Sprint-friendly version of the 9900, giving you a 10.5mm profile, 2.8-inch capacitive touchscreen, a wide QWERTY keyboard, and NFC. The BlackBerry Torch 9850 comes with a 3.7-inch screen (the largest ever on a BB). Both come powered by a 1.2GHz processor, plus Liquid Graphics technology for a better “visual experience.”

The specs are good, but I think I’m with everyone else on the ‘Berry front: we want to see how a QNX-powered BlackBerry would fare in this world of Gingerbreads, Mangos, and iOS.