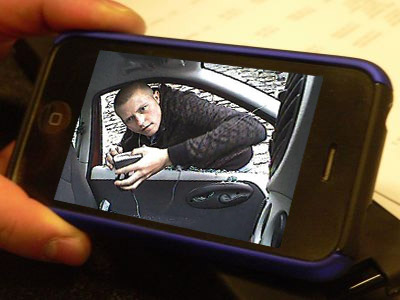 Who wants to come back to see their car broken into, or worse, no car at all? You may have an alarm installed, but is it doing the job it’s intended to? Sometimes not, and Intel is taking owners’ complaints and come up with just the right solution: a Car Security System that connects to your smartphone via an application.

When someone breaks into your car the system begins streaming video to a cloud server to which the car is connected over a mobile network and also notifies the driver. Plus, the video can be stored for later, in case you want to use it as a Court proof. Besides the security system function, the app developed by Intel allows Apple and Android users to open the car door, start their car and other basic functions. A real thief may know this, setup a wireless blocker and steal your car anyway. Whether or not the streaming video is recorded and sotred locally before being sent to a cloud is unknown. There’s also the fact that what if you’re in an area with poor or no coverage, video streaming takes huge bandwidth at a high speed. Unless you want a 320×240 clip to upload to youtube and tell your friends, hey look at my car being stolen!

This technology is still a concept and in development, Intel may have answers for these questions when it gets closer to official release.