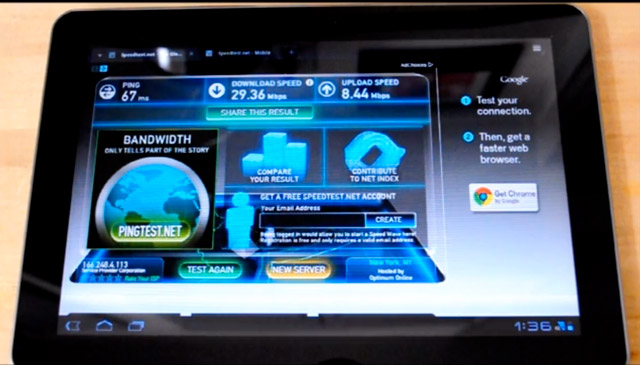 You want fast? You want a wireless connection that just might put your home connection to shame? It looks like the Verizon 4G LTE network is living up to its promises by way of the recently added Galaxy Tab 10.1 4G. How fast is fast? How about a mind-blowing 44.44Mbps down in a real world speed test?  That’s what the guys at Engadget were able to achieve when they ran the standard benchmark through Speedtest.net. They got the Galaxy Tab 10.1, which just added a variant with a Verizon-friendly LTE chip, and put it through its paces no fewer than 15 times. The average speed came out to 28.25Mbps downstream and 7.93Mbps upstream. Keep in mind that doing the same test with the LTE-equipped HTC Thunderbolt got no higher than 21.77Mbps.

The test was run across several different servers in and around the New York and New Jersey area. The best test, with 44.44Mbps down and 9.16Mbps up, was achieved through the Secaucus, New Jersey server. Ping times could be better, averaging at 67ms, but they could be a lot worse too. Whether they’re still able to maintain these kinds of speeds after adoption picks up, well, that’s anyone’s guess.