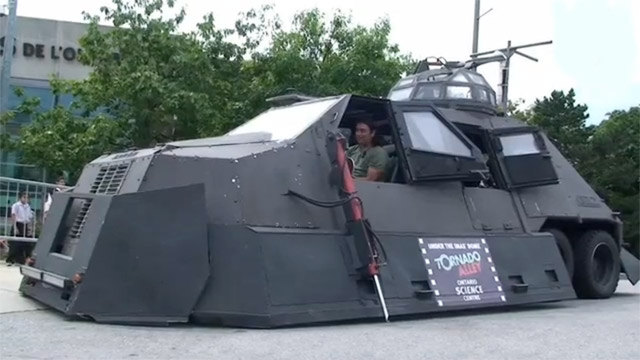 Do you remember that scene in Twister where the man and lady tie themselves to a gas pipe with a leather belt and see the guts of a passing tornado?  Me too. But apparently that was a tad unrealistic.  In reality, you would need an American-built pickup truck, loaded down with 3,600 kilos (7,937 lbs) of steel armour — and one hell of a ballsy videographer.   Which is exactly what Sean Casey assembled. The film-maker, who has been working for eight years to capture such a fictitious clip, stripped his Ram 3500 down to the skivvy and re-dressed it with kevlar, aluminum, steel and rubber (video), complete with two metre-deep ground skewers to keep the thing in place in 350-km/h winds.

“We had to build the right tool to get what in my mind was the perfect shot,” said Casey, “and that’s a tornado coming right at you.” And he succeeded. The shot is featured in his Imax film, Tornado Alley, which is now playing in Ontario, the Netherlands, and several vistas in the U.S. “It was sheer terror in filming it, but it was sheer excitement,” said Casey. “Afterwards you felt like crying. You felt like laughing.” Casey is already starting on a vehicle similar to his current “tornado interceptor,” but capable of traipsing off-road.