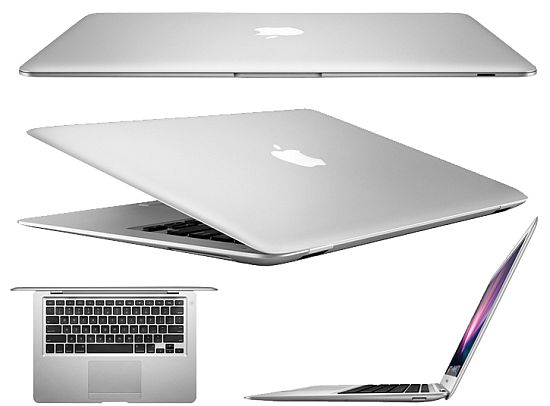 We won’t know any time soon whether it’s true, but the rumour mill has already conjured up the newest edition to the MacBook lineup: MacBook Pros in MacBook Air bodies.

MacRumors.com says it received a tip-off that a MacBook Air-style notebook with a 15” screen is in advanced testing stages in the Apple labs, though their not sure whether it will be called an Air or a Pro. TUAW took the rumour a step further, claiming the 15” Air is being tested alongside a 17” model, too. But how would they be able to shave the inches off of a computer as powerful as the Pro? SSD hard drives and the removal of optical drives, maybe?   “While we don’t know for a fact, we expect that any future ‘ultra thin’ laptop from Apple will also dispense with a built-in optical drive,” writes MacRumors. “As evidenced by its recent release of the optical drive-less Mac mini, Apple has no problem leaving physical media behind.”

Apple was also the first to move away from floppy discs – which makes sense. As a company that manufactures both the hardware and the software driving it, there are less variables than for companies who depend on third parties for their operating systems. With the Mac App store up and running, underscored by the 1 million downloads of Lion OS X in 24 hours, Apple seems safe to assume optical discs are fading from necessity to accessory.  What’s more, the new MacBook Airs’ and Mac Minis’ lack of disc drives don’t seem to be attracting all that much negative attention.

But one question does remain: Is the Air, Mini, and presumably this next-gen Pro mean Apple is weaning its customers off of optical drives entirely? If so, will this reach the next generation of iMacs, too?  Personally, I wouldn’t be too bothered. But I know there are people out there who wouldn’t agree.  What do you think? Is your disc drive an essential part of your day-to-day computing? The speed of SSD and USB 3.0, online movie streaming really kills the need for a DVD-ROM.