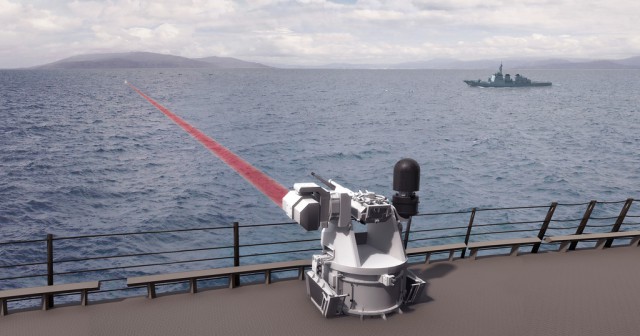 Boeing might be a company better known for developing all kinds of aircraft, but they do other things, too. For instance, Boeing partnered up with BAE Systems to develop an advanced laser weapon system for the United States Navy. The net result is this: The Mk 38 Mod 2 Tactical Laser System.

What makes this different from other laser weapon systems is that it combines both kinetic and directed energy weapons capabilities. This latches on to existing shipboard command interfaces and works in tandem with the widely used M242 Bushmaster 25mm Chain Gun. They get 2.5km of range and selectable rates of fire with this bad boy. The laser part provides incredible precision and accuracy against both surface and air targets.

While BAE Systems and Boeing have been working together for two years on developing a Tactical Laser System, BAE was only awarded the initial $2.8 million contract from the US Navy in March 2011.

Reading this story, I couldn’t help but to think of air quotes and Doctor Evil. That said, I’m sure it’ll cost way more than (pinky finger to lips) one million dollars by the time they’re done. There are also no sharks involved, unless they do decide to strap these frickin’ laser beams to their frickin’ foreheads.